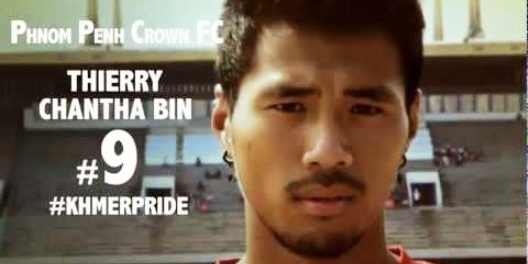 PHNOM PENH (5 Sept 2013) – Expect Cambodia to be a lot more competitive at this year’s SEA Games in Myanmar following the decision of the Football Federation of Cambodia (FFC) to include French-born Thierry Chantha Bin, who plays for Phnom Penh Crown FC.

Other than Thierry, the FFC have also included other French-bred imports Boris Kok and Dani Kouch as well as Cambodian-American Alex Kem in the list of 26 players who will train under Cambodian chief coach Lee Tae Hoon.

“We are not the favorite for sure. We have nothing to lose, so let’s see,” said Thierry.

“This is really important to me, as my first goal by coming and playing in Cambodia was to join the national team. All the efforts I have been through this season were worth it.”

Prior to the SEA Games on 11-22 December, the team will be playing in the BIDC Cup in November in Phnom Penh.