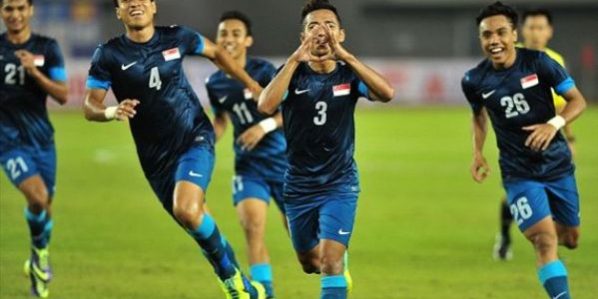 NAYPYITAW (18 Dec 2013) – If there is one thing that Singapore coach Aide Iskandar can promise tomorrow in the semi-finals of the men’s football event at the Zeyar Thiri Stadium, it is that speed bumps will be provided for the Thai triumvirate of Pokklaw A Nan, Thitiphan Puangjan, Adisak Kraisorn.

The trio have been a devastating force for Thailand and which has seen them led the former champions scoring eight goals in the group stage – more than any other teams in the group.

And this is one factor which will weigh heavy on Aide as he plots Singapore’s desire for a place in the final for the first time since 1989.

“They have speedy players and this is one thing which we must be wary and make sure that they do not exploit it to full extent,” said the former Singapore captain.

“But I believe in my boys. We have showed that we can play good football and also we can defend well, where we only conceded two goals in the group stage.

“There were some mistakes for sure, with the set pieces although the more pertinent point is that we should not be conceding those freekicks in the first place.”

With a strong backline and having capable players in the frontline in Shafiq Ghani and Sahil Suhaimi, Singapore do not go into the tie tomorrow as the underdogs for sure. It can be said with some certainty that both Singpore and Thailand are evenly matched.

And with Muhammad Izwan Mahbud between the posts as against his opposite number Kawin Thamsatchanan in their best form possible, it is really anybody’s guess who will come out tops.