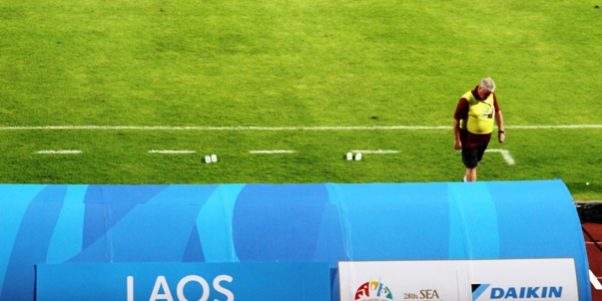 SINGAPORE (30 May 2015) – Twelve goals on the first day of the men’s football event at the SEA Games 2015 makes for an exciting start to the campaign this year.

And while there were expectations that the lesser-regarded teams would at least spring some surprise, the scorching heat seems to have seared all that prospect as Vietnam and Thailand took total control from the get go.

“The first half we did not play as well as in the second. We scored only one goal but the boys never give up and that was important,” said Vietnam coach Toshiya Miura.

Reeking in confidence, perhaps Vietnam knew very well that the game was theirs for the taking considering the quality they have on their side with the likes of Nguyen Cong Phuong and also Mac Hong Quan.

And while the goals might have eventually trickled in for Vietnam for all their possession and domination, Toshiya can at least take solace that all goals for his team were scored by six different players.

In front of several thousand fanatical Vietnamese supporters in red, Vietnam were hardly troubled by Brunei who seems to have gotten lost under the sweltering heat.

In contrast, Thailand were oozing with confidence as star player Chanathip Songkrasin dictated pace and pulled the strings from his new position at the  centre of the park as against his usual down the left flank.

And with Nurul Sriyankem tasked with breaking through the fragile Laos defence, the job of putting it away was left to Chananan Pombupha who had little trouble to slam in four goal to at once perched himself as the top hitman currently.

“We did not go out there to match Vietnam’s goals. We just wanted to play well,” said Thai coach Choketawee Promrut. “I told the players that they need to go out there and enjoy playing the game.”

While defending champions Thailand got off to an exhilarating note, former champions Malaysia will be fully tested when they open their campaign against Timor Leste tonight.