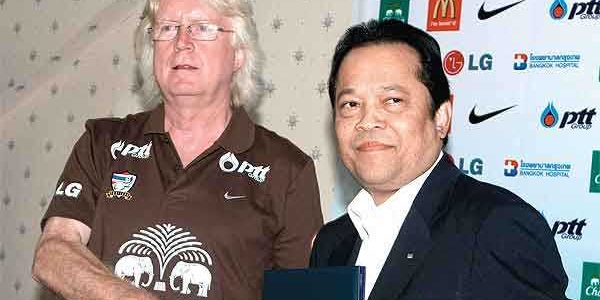 BANGKOK (28 Dec 2012) – Winfried Schaefer will still be at the helm of the Thai national team despite failing to win their fourth ASEAN crown when they were denied by Singapore in the final of the AFF Suzuki Cup last week.

Datuk Worawi Makudi, the president of the FA of Thailand (FAT), said tgis week that the German will still be given the responsibility to guide the Thai national team and see out his contract which expires in mid-2014.

“We have the opening two Asian Cup qualifiers coming up on 6 February at home to Kuwait and then 22 March away to Lebanon. I can confirm he will take charge of the team for those two games,” said Worawi

“We’ll have a board meeting early next year to assess the team’s performance. But that doesn’t mean Schaefer will get the sack. He has already planned for our Asian Cup qualifying campaign, so he will definitely stay until his contract expires in mid-2014.”