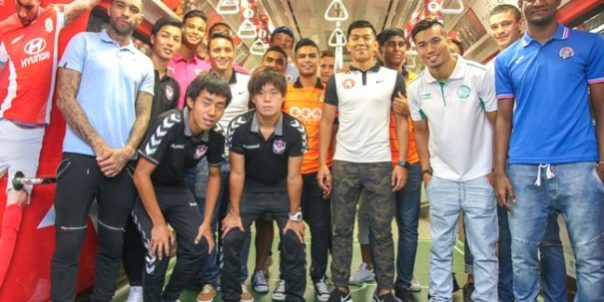 This unique collaboration will bring Singapore football and clubs closer to over two million passengers across the SMRT transport network – in formats such as S. League concept trains, video contents showing goals and highlights on the screens, as well as localised club advertisements in strategic MRT stations.

One of the key initiatives of this partnership is to promote key S.League and National Team matches. The first event to enjoy this exposure is the Great Eastern Community Shield that takes place tomorrow, 13 February 2016. Specially-designed hangers in SMRT train cabins promoting this event were hung in trains early this week; commuters are encouraged to take a hanger to gain free entry to the opening game of the Great Eastern-YEO’S S.League season and also to receive a goodie bag (while stocks last).

The press conference saw representatives from the Football Association of Singapore (FAS), S.League, SMRT Commercial and Great Eastern speak about the partnership as well as how SMRT Commercial is supporting the traditional curtain-raiser for the Great Eastern-YEO’S S.League season.

Ms Dawn Low, SMRT Commercial Managing Director, said: “We are privileged to partner FAS to support our local football and S.League clubs. Our three-year collaboration will see SMRT and FAS jointly deliver meaningful and engaging experiences across SMRT’s island wide public transport advertising network and retail shops. As the exclusive OOH media and digital partner, we will be rolling out many innovative and interactive programmes and campaigns to rally and engage everyone who journeys with SMRT. We are particularly proud of the launch of the S.League train where our commuters and fans can travel with and get up close to their favourite football stars.”

Added Mr Colin Chan, Chief Marketing Officer, Great Eastern Life: “As the co-title sponsor and long-standing supporter of the S.League, we are delighted that a new corporate partner has come on board to boost the sport. Awareness and exposure to new audiences through multiple communication platforms is key to building fan support. We are pleased that the Great Eastern Community Shield, an event close to our hearts, will be the first to be promoted through this new channel.

“This year, in conjunction with the Community Shield, we will be raising much needed funds for The Straits Times School Pocket Money Fund which supports needy children. As a LIFE company, we are not only passionate about promoting a healthy lifestyle through sports but also committed to making a meaningful difference.”

Mr Lim Kia Tong, Vice President, FAS, was effusive in his praise for the new partnership.

“I am delighted to welcome SMRT Commercial as a new partner of Singapore football. We are truly thankful to have the support of a big local company like SMRT. This support for the S.League will further promote all our local clubs from club posters at designated stations near the stadiums to videos of football highlights at the stations too. This partnership will help us to reach out to even more Singaporeans with the millions of commuters using the trains daily.”

Warriors FC defender Madhu Mohana, who is one of the players whose poster is on the S.League train, is confident that this partnership will reach out to more fans and increasing fan attendance. He said: “It is a great idea to have S.League branding, and our club branding in stations closest to our respective clubs. This will raise the profile of our club and hopefully, bring more fans to our matches.”

Albirex Niigata (S) General Manager Koh Mui Tee is also excited about the potential of the outreach to fans following this partnership announcement. He said: “At Albirex Niigata, we have been doing a lot of outreach programmes which involves working with our commercial partners. I am delighted that S.League has secured this partnership with SMRT Commercial, as it presents an even bigger platform to reach out to more fans than the ones we currently engage.”

The 2016 season of the S.League will kick off at 7.45pm on 13 February at the Jalan Besar Stadium, with double Cup winners Albirex Niigata FC (S) taking on defending S.League champions Brunei DPMM FC in the Great Eastern Community Shield. The match will also double as a league fixture, with the score at the end of regulation time being used for the league table. If there is a tie, the winner of the Community Shield will then be decided by spot kicks. There will be no extra-time.