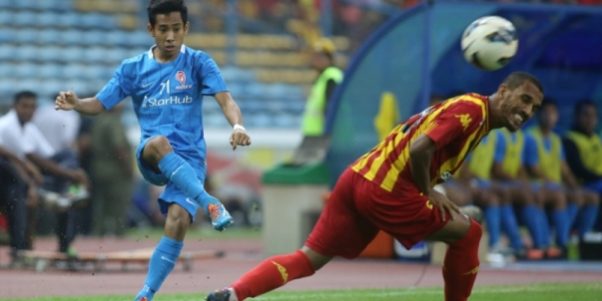 SHAH ALAM (19 April 2015) – Malaysian football coach Dollah Salleh must certainly have Selangor striker Afiq Azmi’s name on top of his list after the 26-year-old plundered a hat-trick in the Red Giants’ 4-0 whitewash of LionsXII last night at the Shah Alam.

It was Afiq’s seventh goal of the season.

Afiq scored his hat-trick in a space of a ten-minute blitz. It all began in the seventh minute on a night when the Lions XII back line was in tatters. He got his second on 11 minutes and completed his scoring after just 15 minutes. Guilherme de Paula completed the rout in the 78th minute.

Afiq had also scored a brace in Selangor’s 3-1 win over the Armed Forces.

At the Sultan Ismail Nasiruddin Shah Stadium in Kuala Terengganu, Felda United made sure of the full points with a 3-1 win over the hosts off goals from Syamim Yahya (21st), Ndumba Makeche (80th) and Liberian hotshot Zah Rahan Krangar (84th).

Once again it was Liberian striker Edward Junior Wilson, fast establishing himself as a super-sub, who made all the difference with two assists when the match looks like it was heading for a draw. Wilson was also responsible for Felda’s come-from-behind 3-2 win over Police the previous week with an assist and a goal.

On Saturday, Wilson first set up Makeche and then Zah Rahan as Felda showed that they are serious contenders for a top bracket finish despite suffering a 4-1 defeat to Perak on 4 April.

Kelantan, despite the 3-1 defeat to Johor Darul Takzim at the Larkin Stadium, showed that the Red Warriors could have solved their striking woes with the latest signing of Nigerian Under-23 international Austin Amutu and Brazilian Gilmar Dos Santos Filho.

Both found the net at Larkin with Amutu giving the Red Warriors the lead after only nine minutes of play and three minutes later Filho had the ball in the JDT net but was ruled offside. This gave JDT some breathing space to check their game and goals by Hariss Harun (19th), Alhaji Kamara (23rd) and Amri Yahya settled the issue in the first-half itself.

Police bounced back to hammer winless Sime Darby with a 4-1 win at the Selayang Stadium.

Maldive international Ali Ashfaq hit a double with strikes in the 36th and 47th minutes before Gambian hitman Mahmadou Sumareh made it 3-0 on 52 minutes. Fauzi Majid hammered the final nail in the Sime Darby coffin deep into injury time after Brazilian Reinaldo pulled one back for the plantation giants in the 76th minute.

Armed Forces began life without head coach B. Satianathan with an inspiring 1-1 draw against Sarawak at the State Stadium in Kuching under caretaker coach Shahrin Majid. The Crocs took the lead through Ryan Griffiths (63rd) but had to share the spoils when Jerry Palacios scored from the spot in the 68th minute.