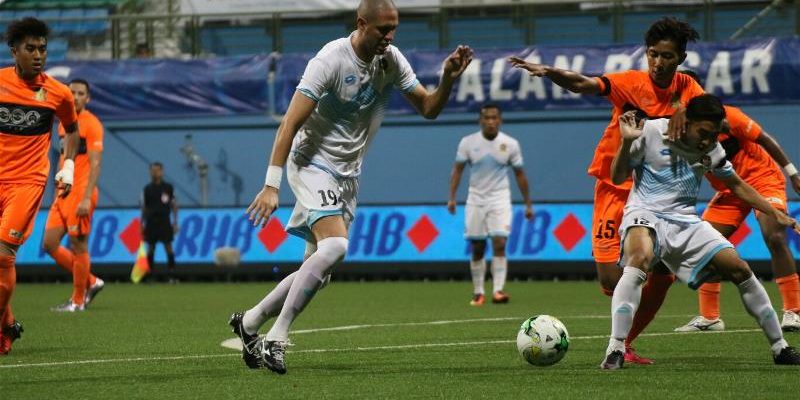 SINGAPORE (4 Sept 2016) – Hougang United spurned an excellent opportunity to go third after a 2-1 defeat to Brunei DPMM this week at the Jalan Besar Stadium.

It all looked good for Hougang as they led 1-0 at half time courtesy of Stipe Plazibat’s ninth-minute opener.

The Croatian forward’s shot was deflected home by DPMM captain Rosmin Kamis from close range, after a neat cutback by Iqbal Hussain.

Plazibat almost scored again four minutes later when he went through on goal via Iqbal’s knock-on, but his resulting shot crashed off the crossbar before going out of play.

DPMM then went close on 21 minutes, with Azwan Ali’s shot getting a deflection off Huzaifah Aziz before hitting the angle of post and bar.

Hougang was then forced to make a defensive reshuffle just before the break, with Fairoz Hasan replacing the injured Delwinder Singh.

Midfielder M.Anumanthan was pushed back into defence to partner Raihan Rahman as a result, but the duo was unable to stop DPMM from scoring the equaliser on 51 minutes.

The towering hit man was at it again just a minute later as he outjumped the onrushing Ridhuan to head home Azwan Salleh’s deep cross into an empty net and put his side ahead.

It was a lead that the Wasps never relinquished, although Hougang had their chances in the final 30 minutes.

On the 64th minute, Fumiya Kogure blazed over from six yards out after Plazibat’s miscued shot fell inadvertently into his path.

Then on 81 minutes, Iqbal went through on goal via Anumanthan’s defence-splitting pass, but DPMM custodian Wardun Yussof pulled off a superb reflex save to deny the former.

Two minutes later, the duo combined again with Anumanthan putting in a teasing ball into the six-yard box which captain Jozef Kaplan just failed to get the vital touch on.

The Cheetahs would pay for their wastefulness as the final whistle soon sounded off to signal a DPMM victory.

The result meant DPMM stayed in third with 32 points, four points clear of nearest challengers Geylang International and Hougang (who have a game in hand).