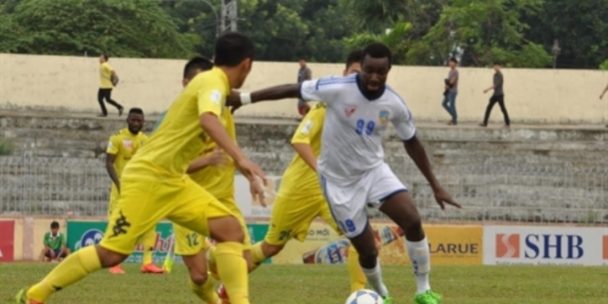 HANOI (11 April 2016) – Lowly Quang Nam put up the goods to beat big spending Thanh Hoa 2-0 with a double from burly striker Suleiman Abdullahi on the fifth matchday of the Toyota V-League this week.

Under pressure to provide a more consistent challenge to the top teams like Hai Phong and Da Nang, third-placed Thanh Hoa seemed to be under pressure as Suleiman headed in the lead after just 15 minutes.

Several changes into the second half failed to ignite Thanh Hoa into action as Suleiman then completed his brace with the second goal of the game with an easy tap in right at the end.

It was Quảng Nam’s first win of the season.

In the meantime, league leaders Hai Phong opened up a gap at the top of the table with an easy 4-2 win over Hoang Anh Gia Lai at home at the Lạch Tray Stadium.

It was Hai Phong’s fifth win in a row, with Errol Anthony Stevens scoring a hat trick after Le Xuan Hung had opened account after 20 minutes.

Both of Hoang Anh Gia Lai’s goals were scored by Moreira Osmar Francisco.

Elsewhere, Song Lam Nghe An beat Saigon FC – previously Hanoi FC – 1-0 with Odat Onoriode Marshal scoring the only goal of the game in the 30th minute.