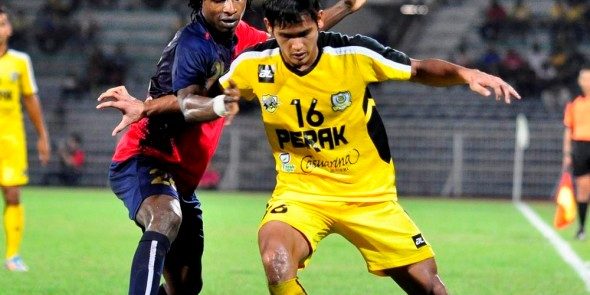 At the Sultan Mohd IV Stadium in Kota Bahru, the Red Warriors fell to a 1-0 defeat at the hands of Felda United – the only unbeaten team in the league after five matches. It was Kelantan’s second home defeat in the league this season after the 4-0 whitewash by Police on Feb 21.

Under-fire Liberian striker Edward Junior Wilson gave coach Irfan Bakti plenty to smile with the winning goal which came on 60 minutes as Felda moved to 11 points to keep their place at the top of the Malaysian Super League.

Selangor carved out a 2-0 win over Sarawak. The Red Giants rode on goals by Afiq Azmi (11th) and Fitri Syazwan for their second win and eight points and fifth place – one rung below defending champions JDT who suffered another disappointing outing on the road after a come-from-behind 1-1 draw against Sime Darby.

Former Sarawak player and international Junior Eldstal equalised for JDT on the hour after Sime Darby went ahead through Muhammad Nazrul Kamarulzaman who came off the bench to score after 35 minutes.

But the show was at the Perak Stadium in Ipoh where Police went on a blaze in a 10-minute spell which began in the 52nd minute with Mali Olympian Dramane Traore leading the fightback with the equaliser to wipe out Perak’s Nurridzuan Abu Hassan’s 47th minute lead.

Next came the “killer strikes” with Ahmad Ezrie Shahfizie (56th) and Traore (62nd) hitting target which left previously unbeaten Perak stunned. Perak, however, are third at the table on eight points while Police are second with nine points.

JDT’s inconsistent form in the league is certainly a cause for worry for the Southern Tigers who struggled to beat Sarawak 2-1 at home last week. The draw against Sime Darby came the hard way and coach Bojan Hodak is having a tough time in juggling his star-studded side that is often bogged down by injuries.