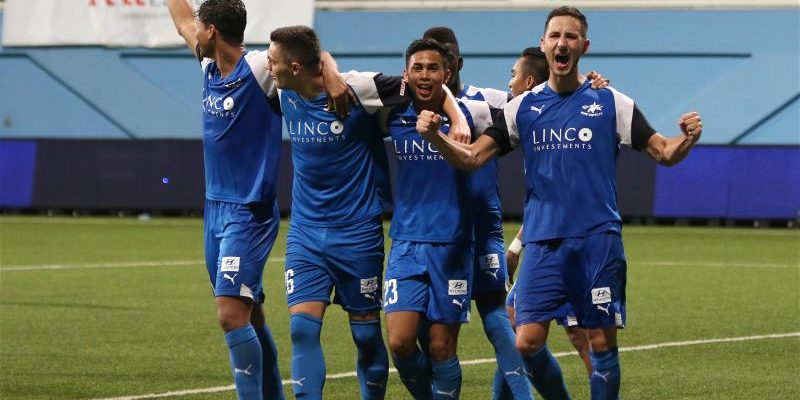 SINGAPORE (29 June 2017) – A double from Stipe Plazibat snapped Albirex Niigata (S)’s unbeaten run in the Great Eastern-Hyundai S.League when they suffered a 2-0 loss to Home United at the Jalan Besar Stadium.

Plazibat struck on either side of half-time as the White Swans fell to their first defeat after 12 games in the S.League.

It was Albirex who had an early chance to open the scoring in the ninth minute but Takuya Akiyama headed wide off a freekick from the right.

The designated visitors could have gone ahead at the other end three minutes later when Plazibat set up Faris Ramli but the latter’s left-footed shot was parried by a flying Yosuke Nozawa.

Ryota Nakai then looked odds-on to score in the 14th minute after Naofumi Tanaka’s cross fell into his path six yards out from goal.

However, he failed to tap the ball home from two yards as Sirina Camara made a last-ditch clearance to put the ball out to safety.

Adam Swandi came close twice in the space of six minutes, volleying at Nozawa from outside the box on 18 minutes before drilling a shot straight at Nozawa after the Albirex defence failed to deal with Juma’at Jantan’s cross.

Izzdin Shafiq saw his effort blocked for a corner just after the half-hour mark, but the Protectors would take the lead from the ensuing set-piece.

Izzdin’s corner was headed by Abdil into the path of Plazibat who made no mistake from close range to put Home ahead.

Home were then handed a blow just before the break as Singapore international custodian Hassan Sunny had to be stretchered off after a nasty clash of heads with Naofumi Tanaka, with 23-year-old Rudy Khairullah coming on in an enforced change.

Aidil Sharin’s side could have further extended their lead eight minutes after the break but Amiruldin Asraf’s effort was easy for Nozawa.

Faris spurned a glorious opportunity to make it 2-0 in the 55th minute, dragging one wide after latching onto Abdil’s well-weighted pass from defence.

Albirex were reduced to ten men in the 65th minute when defender Yasutaka Yanagi was shown a straight red after hauling down Faris on the edge of the box.

However, it was the White Swans who nearly levelled matters two minutes after the sending off but top-scorer Tsubasa Sano was denied by an onrushing Rudy who pushed it away for a corner.

Albirex threw the proverbial kitchen sink at Home thereafter and Nagasaki had a freekick that went straight into the arms of Rudy in the 73rd minute, before Abdil weighed in with a well-timed challenge to prevent Sano from pulling the trigger six minutes later.

With eight minutes remaining, Sano could have salvaged a point for Albirex but the forward somehow stabbed over from close range.

They were made to rue that miss as Plazibat sealed the victory deep into stoppage time, converting from the spot after Faris was adjudged to have been felled in the box by Shuto Inaba.

The result put Home on 26 points, one point off second-placed Tampines Rovers while Albirex remain at the summit with a four-point lead over the latter.