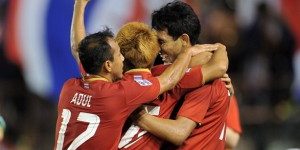 The Englishman replaced Bojan Hodak, who had gone on to sign as the assistant coach at Chinese side Shandong Luneng Taishan FC.

The 61-year-old Booth had previously coached in Brunei, Myanmar, India and also Laos when he led them to the final round of the AFF Suzuki Cup 2010.

“We chose Booth because of his record of success and his well-established reputation in Asia. He come to us with wealth of experience and a proven track record and we are fortunate to secure his service for the rest of Metfone League season, as well as the important AFC President’s Cup matches that lie ahead (in September in Taiwan),” said Rithy Samnang, the president of Phnom Penh Crown.

Added Booth: “I am so happy to join with Cambodian players, I will try my best to lead Phnom Penh Crown to success in my short time.

“I expect I can develop their abilities,” he added.