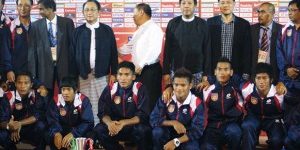 MANILA (20 April 2011) – Through the assistance of the FIFA Goal project, an artificial pitch will be built by the Philippines Football Federation (PFF) at the Philsports Arena in Pasig City.

PFF president Mariano Araneta Jr said that with the funding secured, the initial talks between the federation and the Philippine Sports Commission – which controls the Arena – has received encouraging response.

The pitch will replace the football field at the arena being managed by the PSC.

“We have had initial talks with PSC commissioner Chito Loyzaga, who oversees football, and they are offering the PFF the Philsports football field where the federation can construct the artificial pitch,” Araneta said. “The PSC’s terms are favourable and on a long-term basis.”