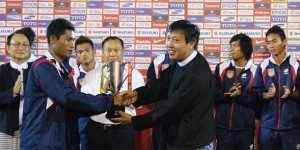 JAKARTA (20 April 2011) – Persipura Jayapura opened up a nine point lead at the top of the Indonesian Super League (ISL) keeping course for the second league crown in three years.

And this week, the excellent teamwork between Gerald Pangkali (44th minute), Titus Bonai (88th minute) and Lukas Mandowen (90th minute) who all scored for the hosts were enough for them to see off Persiba Balikpapan 3-1 at the Mandala Stadium in Jayapura.

Aldo Barreto netted the only goal for Persiba off a superb solo effort in the 50th minute.

With second placed Semen Padang losing 1-0 to Persela Lamongan, it allowed Persipura to be comfortable at the top where they are now undefeated in seven matches.

In the meantime, Persib Bandung’s aspiration to close the gap on Persipura suffered a huge dent when they suffered their second home loss of the season – this time going down 1-0 to PSPS Pekanbaru at the Si Jalak Harupat Stadium.

The only goal in the game came off Herman Dzumafo Epandi in th 47th minute.

With just seven games to go, Persib slipped to ninth in the standings with 29 points from 23 games while PSPS climbed to 10th with 24 points from 19 games.