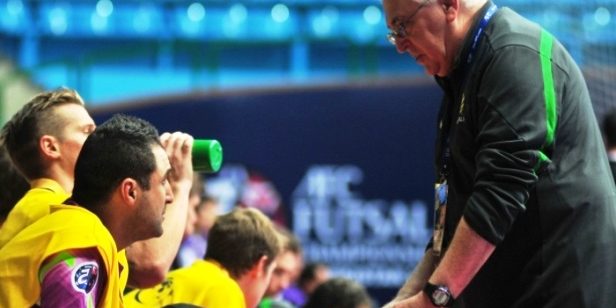 SYDNEY (19 Feb 2016) – Australia coach Robert Varela insists Friday’s fifth place play-off with Kyrgyzstan at Universal Stadium is his side’s final as the Futsalroos look to book their ticket to the 2016 FIFA Futsal World Cup in Colombia in September.

After being eliminated at the quarter-final stage by Thailand, Australia responded well by seeing off Iraq 5-3 on Thursday to keep their dream of qualifying for futsal’s showcase event alive by claiming the fifth and final Asian spot.

But standing in their way are Central Asians Kyrgyzstan, who pulled off an incredible 6-2 victory over 2014 champions Japan to set up a showdown with Varela’s side.

“We beat Iraq 5-3 and Kyrgyzstan beat Japan 6-2 so that shows it’s what you do on the night that counts. We don’t get a headstart because we are above them in the rankings – rankings are based on past performances,” said Varela.

“Our game plan won’t change much [to what it would have been against Japan], we still need to keep possession well so we are not faced with defending so much and can then move the ball forward into scoring areas. It’s about executing what we do well and limiting our mistakes.

“For us this is our final and we are 40 minutes away from making it two World Cups in a row. We know it won’t be easy but win or lose we’ll leave our guts on the court.”

The 2012 semi-finalists had earlier advanced to the last eight as runners-up to Japan in Group D after securing victories over Malaysia and Qatar.

But after being eliminated by Southeast Asians Thailand, the Futsalroos still had it all to play for in the fifth place play-offs.

“We had to defend against their passing game and we executed our game plan well. We were mentally strong and scoring five goals in a do-or-die game was a good effort,” added Varela.

“There’s not much time to analyse Kyrgyzstan but we’ll look at videos before showing clips to the players and discussing ways to take care of their strengths and take advantage of their weaknesses.

“In terms of physicality it’s very difficult. But we have an advantage in that we’re used to playing games close together in Australia as in the national championships we sometimes have to play two games in a day.”

After qualifying for their first quarter-final since 2002, Iraq suffered a 3-0 reversal to hosts Uzbekistan in their last eight fixture before the defeat to Australia.

“Our players have had an overload of match-after-match so it’s hard to control the game; most of them were playing with injuries,” said coach Haitham Abbas.

“Throughout the match our mentality was good, but physically Australia were better than us and this made the difference.

“But getting to the quarter-finals means futsal is developing in Iraq. We are now among the best eight teams in Asia and this is good for our country.”