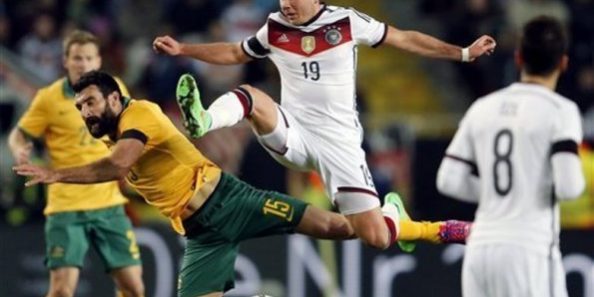 SYDNEY (26 March 2015) – James Troisi and Mile Jedinak were both on target as the 2015 AFC Asian Cup winners earned a highly creditable 2-2 draw with world champions Germany on Wednesday.

The Socceroos, who were crowned champions of Asian in January thanks to their 2-1 defeat of Korea Republic in Sydney, fell behind on 17 minutes when Sami Khedira intercepted a Jedinak pass before galloping down the left flank and setting up Marco Reus to score at the near post.

Bloodied and yet unbowed, Australia – minus the services of Tim Cahill, Massimo Luongo, Trent Sainsbury and Matthew Spiranovic – regrouped and duly drew level five minutes before the break, Nathan Burns crossing to Troisi who beat Germany goalkeeper Ron-Robert Zieler with a firm header.

AFC Asian International Player of the Year Jedinak then made amends for his first half error by handing his side the lead on 50 minutes as the Crystal Palace star curled home a pinpoint free-kick from range which a desperate Zieler could only help across the line.

Germany, to their credit, rallied and the almost inevitable equaliser came after 82 minutes, Lukas Podolski finding room in the penalty area to fire past Socceroos custodian Mat Ryan.

Australia are now scheduled to face Macedonia on Tuesday before finding out their opponents for the second phase of joint 2018 FIFA World Cup and 2019 AFC Asian Cup 2019 qualifiers at a draw in Kuala Lumpur on April 14.