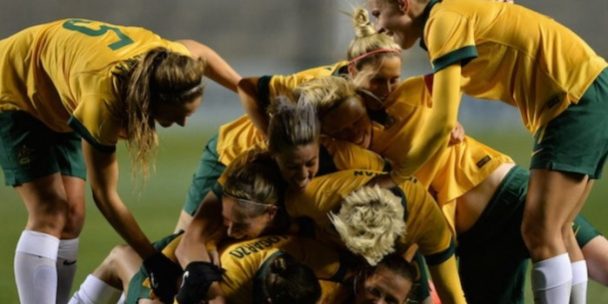 SYDNEY (1 March 2016) – Australia struck an early blow in the race for Olympic Games qualification after goals from Lisa De Vanna, Michelle Heyman and Katrina Gorry helped ease the Matildas to a 3-1 win over Japan at a chilly Kincho Stadium on Monday.

In front of a vocal home crowd that braved the two degree temperature, a De Vanna header and Heyman’s sharp finish saw Australia race to a 2-0 lead inside 40 minutes only for Japan to reply through Yuki Ogimi in first-half stoppage time.

And an end-to-end second half saw 2014 AFC Women’s Player of the Year Gorry add another for the Matildas in the 78th minute to wrap up an impressive victory.

The headline match of the opening day pitted Asia’s number one and number three ranked nations and was played at a high intensity right from the start, with Heyman and Nahomi Kawasumi both having early sights of goal.

Australia had been pressing aggressively, countering with pace and managing to trouble Japan from wide areas and it was from there that the first goal came from.

A Stephanie Catley cross found Gorry at the top of the penalty area and after a couple of shots that were only half cleared, the ball fell back to the Matildas midfielder on the right and her cross was powered home from the head of De Vanna to hand Australia a 26th minute lead.

An Alana Kennedy free-kick flashed just wide of the left-hand post eight minutes later as Australia continued to attack with pace and started to assert their dominance with the aggressive pressing game causing frequent turnovers.

And Japan coach Norio Sasaki made a surprising change with five minutes remaining in the first half, replacing Shinobu Ohno with Kumi Yokoyama, but barely thirty seconds later the hosts fell further behind.

A fortunate touch off the back of referee Carina Vitulano midway inside the Japan half fell to De Vanna who surged towards the area and played in Heyman, who slid her shot past the onrushing Erina Yamane to put the Matildas 2-0 up in the 41st minute.

Japan, though, pulled a vital goal back in first-half stoppage time after an intricate passing move inside the Australia penalty area involving Kawasumi, Saori Ariyoshi and Mizuho Sakaguchi ended with Ogimi poking the ball past Lydia Williams.

The opening period of the second half developed into a midfield battle with both teams trying to control possession and create chances through a patient build-up, and although the hosts had the best of the chances, the closest they actually came were long-range efforts from Sakaguchi and Emi Nakajima.

Thereafter the game became more open with Heyman directing a header at Yamane and Japan captain Aya Miyama forcing a diving save from Williams high to her left just after the hour.

But on 78 minutes Australia struck what would prove to be the crucial blow as a cross from the right of the area by Emily van Egmond was met at the back post by an unmarked Gorry who powered her header across Yamane and in off the post.

And despite late pressure from Japan, who had a series of free-kicks from dangerous positions, Australia hung on for a win that gives them both a genuine shot at booking one of the two tickets to Brazil later this year and some measure of revenge after Japan beat them in the quarter-finals of last year’s FIFA Women’s World Cup.

IN THE MEANTIME, China opened the AFC Women’s Olympic Football Tournament Rio 2016 qualifiers with a hard-fought 2-0 win over Vietnam at Nagai Stadium on Monday.

After a tense opening half, captain Li Dongna missed a 51st minute penalty against a resilient Vietnam before Gu Yasha’s 57th minute strike finally opened the scoring for China.

And a Zhang Rui penalty six minutes later eased the Steel Roses to victory against the qualifiers.

“Since October I started coaching this team and this is not the best game we’ve had, but it’s also important that we picked up three points in the first match. My team has a tendency to follow other teams like a chameleon, so if we are facing a team that’s not too strong we also play that way, but if we play the likes of England or USA we become stronger,” said China coach Bruno Bini.

“So, when we play stronger teams here we’ll also be stronger – it’s also a good sign that we didn’t play a great game but still managed to win.

“Of course we are confident, if not we would return to China – we tried to make more goals but the score is what it is.”

Defensively well-organised with a narrow back four marshaled by Chuong Thi Kieu and Bui Thi Nhu, Vietnam restricted China to just a handful of half chances over the first half.

The best of those fell to Ma Xiaoxu whose 21st minute effort failed to test Dang Thi Kieu Trinh in the Vietnam goal before she also sent a free-kick wide 10 minutes later, and then misdirected a header from a Xue Jiao cross a minute shy of the break.

China coach Bini made a change at the break, introducing Lou Jiahui who immediately gave her side a greater attacking threat at the start of the second half.

Firstly, Zhang sent her shot from the right side of the penalty area just wide with less than six minutes played, and a minute later, they had a chance to open the scoring from the spot.

A tussle in the penalty area saw referee Lucila Montes point to the spot and captain Li stepped up only to see her shot well saved by goalkeeper Thi Kieu Trinh, who flung herself to her right to make the save.

China, though, finally made their pressure pay as Gu met Ren Guixin’s cross to lash home for China shortly before the hour mark.

Some six minutes later China had a second penalty as Ren picked up the ball at the top of the penalty area and was brought down by Duong Thi Van.

And with captain Li relinquishing spot kick duties, Zhang made no mistake to double China’s lead with 63 minutes gone.

Nguyen Thi Lieu surged forward from the restart and sent a curling shot onto the roof of the net and Nguyen Thi Tuyet Dung also had a half chance with five minutes remaining as Vietnam finished strongly, but it was China who ultimately claimed the hard-fought win.

“Everybody can see that the Vietnamese players compared with the Chinese are physically smaller, but we’re really happy with the sprit we showed and we fought 100% throughout,” said Vietnam coach Mai Duc Chung.

“Before we came here we played a friendly tournament in China, there we lost 8-0 so our players knew what to do.

“We had a chance to improve our fitness and we could keep up with China. Of course, most of the time we defended not attacked, but at half-time I said just to try your best and maybe we will lose but we can’t lose our spirit.

“If we compare China today and during the previous tournament, I think today China didn’t use their best players and they had some new players, so maybe China were trying to keep their fitness for the coming matches.”