NO LIVERPOOL FOR OFFICIAL OPENING OF BURIRAM PEA I-MOBILE STADIUM 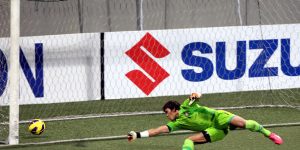 BURIRAM (20 June 2011) – Hopes of getting English giants Liverpool to play a friendly match to commemorate the official opening of Buriram PEA’s New I-Mobile Stadium on 2 July 2011 has fallen through.

Liverpool FC explained that they will no have enough time to accomodate Buriram as they had already drawn up matches for their Asian tour which also included stopovers in China,  Malaysia and South Korea on.

“They sent a letter explaining they did not have enough time to make the arrangements,” said Buriram chief executive officer Kanoksak Pinsaneng.

“It has the best drainage system among stadiums in Thailand,” said Newin Chidchob, the chairman of Buriram PEA. He added:

“One of my dreams has come true and the only thing I want now is to see Buriram PEA win the Thai Premeir League (TPL) title. I am sure that we will win the title.”

In the first official match at the I-Mobile Stadium last week, the current TPL leaders scorched to a 5-0 roasting of Chiang Rai United.

“The stadium is not only the pride of Buri Ram people but also all Thais,” said Newin. “If the national team want to use it, we will be happy to allow them to use it.”