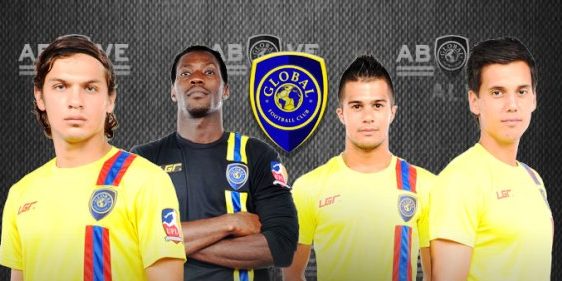 MANILA (8 Feb 2013) – Two goals in each half gave defending champions Global FC a well-worked 2-0 win over Pasargad in the second match of the 2013 UFL season opener, writes Rick Olivares.

Newcomers Niño Ochotorena and Ben Starosta scored in the 45th and 75th minute to lift their club that was missing a few of their national players over hard luck PSG that had their chances but could not find the back of the net.

Global fielded a more home-grown line-up with an eye towards the upcoming AFC President’s Cup wherein they will be participating. Ochotorena manned the right flank in place of the missing Jeffrey Christiaens and banged in the second ball off a right corner shot.

Starosta, who had previously played in Poland, was superb at the centre of the park as his pace and vision inspired their attacks. His quick snap of a header following another corner kick doubled Global’s lead and snuffed the life out of a Pasargad team that was missing the defense of Jaham Taher who was out because of yellow cards accumulated during the UFL Cup.

“I am happy to be able to score for my new team,” said Starosta who was somewhat winded by the humidity. “In Poland at this time, the temperature is falling so I don’t miss the cold. Playing here in the Philippines where I heard the football scene is growing is all good.”

Loyola Opens Season With 4-1 Beat Down of Army

For a while, it did not look like it was going to be the start Loyola Meralco Sparks were looking for. The opening match of the 2013 UFL season was delayed by at least five minutes when the coaching staff of Army, their opponent for the day, questioned the difference in the shade of orange of several Sparks players. When it was all sorted out, Loyola, temporarily lost their focus and conceded a goal in the 18th minute when an unmarked Relan Bretaña fired from outside the box for a 1-0 lead.

Army, sans national players Roel Gener, Boogie Margarse, and Eduard Sacapaño managed well early on with Ric Becite leading the charge from the middle. The early goal was a good enough buffer but it was only a matter of time before Loyola, missing three national players in the Younghusband brothers and number one keeper Ref Cuaresma, found their groove.

The early goal galvanized the Sparks with Mark Hartmann orchestrating the attack. Loyola’s new striker, Freddy Gonzalez scored his first goal for the club with a superb header in the 32nd minute for the equalizer.

Hartmann gave Loyola the lead when he converted a penalty after midfielder Jang Jowon was tripped inside the box by Army defender Wilson de la Cruz.

Loyola continued their assault on Army that saw their defense crumbled with the quick and diagonal passing of the Sparks. In the 58th minute, the Sparks put some distance between them and Army when Minho Park’s free kick from 30 yards out found Jeong Byeong Yeol who headed home to it 3-1, Loyola.

Chad Gould completed a hat trick of headers for goals when his sharp flick off a Mark Hartmann corner dipped past Army keeper Vic Troyo for a 4-1 win.

“It was a good win for us,” said Loyola head coach Vincent Santos. “We could improve on our finishing as we hit the post twice with the keeper away from the play. In the league, it’s not only the wins that counts but also the goals. It’s still a good start.”