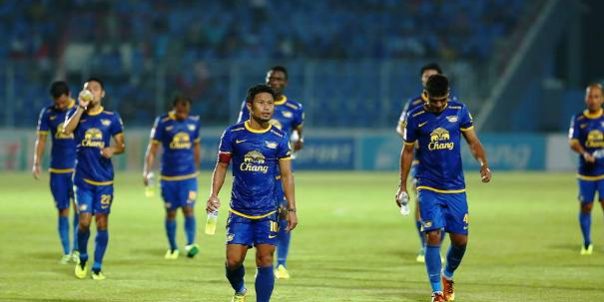 BANGKOK (24 July 2014) – It is neck to neck battle at the top of the Thai Premier League (TPL) 2014 where after 25 matches played, defending champions Buriram United, likely usurper Muang Thong United and also title aspirants Chonburi FC are on 50 points each.

And this week, Buriram showed their seriousness to put their disappointment in the AFC Champions League behind them when they thrashed Chiang Rai United 5-0 at home at the i-Mobile Stadium.

The mid-table side had no answer to an attack-minded Buriram who scored twice in the first ten minutes of the game alone – through Andres Tunez and Carmelo Gonzalez.

Muangthong could have stayed on top had they not fallen to BEC Tero Sasana 1-0 with the only goal of the game coming off Pimkoon in the 77th minute.

On the other hand, Chonburi kept up the pressure on the leaders when they edged PTT Rayong 1-0 for their sixth win on a trot. Thiago Cunha scored the winner in the 62nd minute. Not to be discounted is former leader BEC Tero Sasana, who is currently placed fourth with 48 points.