NAGA THRASH PHNOM PENH TO MOVE UP TO SECOND 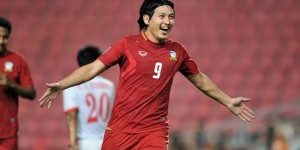 In the match that was played at the Army Stadium, Momoh Sumaila gave Naga the lead just five minutes in as Teab Vathanak then added the second goal on seven minute before Julius Oiboh slammed two further goals for the final score line.

“I am very happy the team came good and we could play our normal game,” said Naga coach Prak Sovanara. “The loss against Prek Pra rankles, but we have to get over it and move on.”