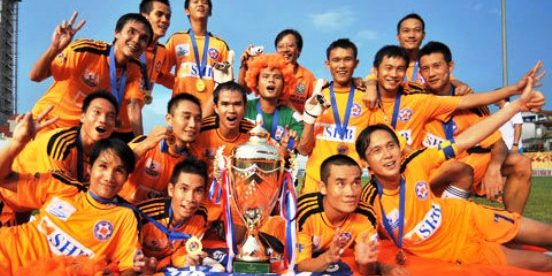 PHNOM PENH (30 May 2011) – Former champions Naga Corp FC came back from a goal down to demolish Chhlam Samot FC 8-3 in the Metfone Cambodian League 2011 league tie at the National Olympic Stadium.

Chhlam Samot, who are making their debut in the league this year, grabbed the lead off Olabode Paul in the 25th minute.

But Naga were determined to build on their winning run and quickly found the equaliser off Kob Sa three minutes later before Oiboh Julius then stole the lead for Naga with two minutes remaining in the first half.

The score at the break was 2-1 to the advantage of Naga.

Even though Chhlam Samot did score two further goals from Sanny Dauda in the 55th minute and Pov Somnang in the 58th minute, the second half was all Naga as Oiboh completed his hat-trick (64th and 84th minute) as Om Thavrak (48th minute), Teab Vatanak (66th and 88th minute) and Esoh Omogba (82nd minute) the scored the other goals.

In the other match, National Police were held to a 3-3 draw by Rithysen.

On the other hand, Preah Khan Reach FC picked up the full points in their match against Prek Pra Keila following their 5-4 win over the latter.

Prek Pra Keila grabbed the lead in the fifth minute of play in the Sen Soukey but Preah Khan rebounded to take a 3-1 lead at the half off goals from Prak Mony Udom (28th minute), Phany Rotha (36th) and Tum Saray (42nd).

Prek Pra Keila then pulled up to score three goals within the space of five minutes – Jamiv Adbayo (70th minute), Soth Sa Aun (71st) and Math Hosan (75th) – to put the score at 4-3 to their advantage.

But their lack of staying power allowed Preah Khan Reach to claw back to score two further goals from Phany (77th) and Khuon Laboravy (81st) for them to pick up the full points.