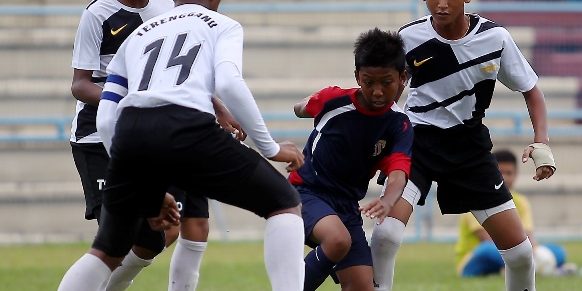 KUALA LUMPUR (10 Dec 2012) – MyKids Kuala Lumpur came from behind to force a shootout before proceeding to defeat MyKids Terenganu 4-3 on penalties at the Sultan Ismail Nasiruddin Shah Stadium yesterday.

Terengganu took the lead in the first half when Arham Khussyairi Abdul Wahab sent the hosts ahead just nine minutes into the game before the city boys battled back to equalize off Zainur Ariffin Ahmad Latifi in the 55th minute.

Both sides tried desperately to find the winner but were unable to force the game into the dreaded shootout.

An elated KL coach Mohamad Shariful Hisham praised his boys for fighting back in the second half and snatching the equaliser. “We were down but they worked hard to get back into the game. Our players were smaller physically but we proved it was not a problem today.”

“We would like to thank the parents of the players for their support. Their morale support certainly went a long way in helping us win today,” Shariful commented. “I hope this tournament will be held again next year.”

His opposite, Ahmad Shahiruddin Adb Manan, said his team was unfortunate not to have won. “We tried out best in the final but lost out in the shootout. We took the lead but they came back and equalized. Everything changed after that. The best team won the final and we respect that.”

“We will come back stronger next year.”