Myanmar to Rest Several against Cambodia 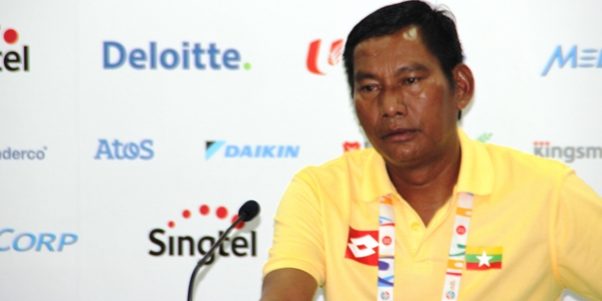 SINGAPORE (10 June 2015) – With a place in the semi-finals already guaranteed, Myanmar will be resting several key players ahead of their final Group A match against Cambodia tonight at the Jalan Besar Stadium.

After three matches in the group, Myanmar have picked up the maximum nine points – including wins over Indonesia and hosts Singapore.

“We will rest several players for the match against Cambodia,” said Kyi Lwin.

“The core players are tired after playing in so many matches. So since we are already in the semi-finals, we will be resting some of them so that they will be fresh for the semi-finals.

“After three matches in the group and after the way we improved from game to game, I believe that we are still on track to winning the gold medal as we had targeted before the tournament starts.”

Among the players likely not to see action would be Thura Shine, Ye Ko Oo and also Naing Kaung Sat among others.

Myanmar failed to make the cut for the semi-finals of the SEA Games in 2013 due to a mistake in the ‘interpretation’ of the rules. The AFC practiced head-to-head rule as against goal difference.

But this time round, Myanmar made sure that there is no repeat of that debacle as they went all out for the win in all of the matches they have played thus far.

Against Cambodia tonight, they will only need only a draw to make sure that they win the Group A to set up a semi-final clash against the runners-up team from Group B.

“We are strong enough to take on anyone, so we will be all out to get a perfect record in the group,” added Kyi Lwin.

“The win will not only be good for the fans but also for the team to get into that winning mentality.”