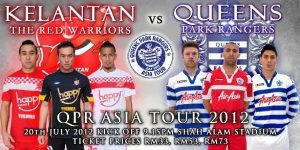 JAKARTA (28 Dec 2010) – The chief of the Indonesian Metropolitan Police Irjen Pol Sutarman has confirmed that more than 9,000 police personnel will be placed in and around the Gelora Bung Karno to ensure that no untoward incident take place in the match between Indonesia and Malaysia tomorrow night.

Indonesia will take on Malaysia in the second leg final of the AFF Suzuki Cup 2010 with the hosts hoping that they can overturn a 3-0 deficit from the first leg in Kuala Lumpur.

With the 70,000 tickets to the final of the biennial championship already sold out, it is expected that the game will be a fiery affair given the nature of the game and also the emotions involved.

The presence of the more than 9,000 police personnel tomorrow night is more than triple the number for the earlier preliminary round matches or for the semi-finals.

“Our prediction is that it will be a very volatile affair given the circumstances and it is for that reason why we have decided to increase the number of police personnel,” said Irjen Pol Sutarman.

The 9,000 police personnel will be stationed in a three-ring formation in and around the Gelora Bung Karno Stadium with the emphasis in checking on the spectators right from the first entry point into the whole sports complex.

Sutarman explained that the measures taken are to ensure that the Indonesian fans do not vent their anger following the team’s loss from the first leg in Kuala Lumpur.

“We predict that Indonesia will win the game tomorrow night but they will still lose the tournament because of the defeat in Kuala Lumpur. For us, we have to make sure that the fans do not vent their anger on anyone,” he added.

In the meantime, Irjen Pol Sutarman asked that the fans avoid using laser pointers on the night to give distraction to any of the players on the pitch and that the players take to the final game on a  sporting note.

“If the team win, we should be grateful but if we lose, we should also accept it. We should not laser the other players. That is very unsporting and the world will criticise us,” added Sutarman.

Towards ensuring that the fans behave in a sporting manner, police personnel will be frisking spectators and also prevent them from bringing in laser, flares and also fireworks.

“If anyone is caught bringing in these prohibited materials, we will not hesitate to escort him out of the stadium,” added Sutarman.

In the meantime, the Malaysian team had to change their training venue this evening from the planned Lebak Bulus Stadium following the bad jam enroute.