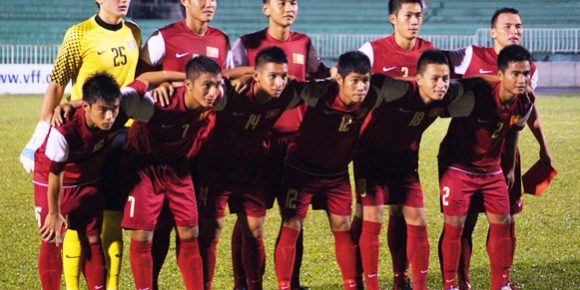 BANGKOK (24 Feb 2011) – It was a day of mixed fortunes for teams across ASEAN yesterday with some getting the upper hand while others falter in their opening qualifying match of the Olympic Games 2012.

With the Singapore-Yemen game postponed to another date due to civil unrest in the Middle East, neighbour Thailand opened their campaign in Bangkok with a slim 1-0 win over Palestine.

The Thai dominated play for long periods in wet and slippery conditions at the Supachalasai Stadium and should have won by a much larger margin where they only scored the only goal in the game on 42 minutes through Patchya Narat.

Chananan Pombupha provided the cross and Patchy did not disappoint from close range.

“We played much better than Palestine,” said Charnwit Phalajivin, the chief coach of the Thai Olympic side.

“We had several chances but failed to get a second goal. But one goal is fine. We have to improve our scoring. In the second leg, Palestine may be under pressure because they will have to attack and this could give us space at their back.”

The return tie will be played at the Faisal Al-Husseini Stadium in Al-Ram, West Bank on 9 March 9.

In the meantime in Kuala Lumpur, the young Malaysian side scored a comfortable 2-0 win over Pakistan.

Three minutes in, Wan Zaharulnizam Zakaria pounced on a loose ball for the first Malaysian goal before Pakistan were punished with a red card when striker Ansar Abbas was kicked out from the match for kicking Malaysian keeper Khairul Fahmi Che Mat in a goalmouth melee.

With seconds remaining in the first half, Malaysia doubled their lead when Mohd Irfan Fazail shot past goalkeeper Yousuf Ejaz Butt.

In Palembang, Indonesia failed to capitalize in their early goal when they fell to a 3-1 loss to Turkmenistan at the Gelora Sriwijaya Jakabaring Stadium.

Titus Bonai gave the homesters the best of start in the 13th minute of play when he slammed the rebounder off an earlier shot from Oktovianus Maniani beyond the reach of Turkmenistan keeper Geldiyev Batyr.

But three minutes later, Turkmenistan got back into the game with the equalizer off a stiff grounder from Amanov Arslanmyrat.

Both teams showed no respite after the break and after several missed chances, it was to be the visitors who went ahead in the 81st minute through the unmarked Boliyan Alexande.

Vahyt then wrapped things up for Turkmenistan for their third goal of the game four minutes to the end.

For Myanmar, they will have at least a fighting chance for the return tie despite losing 2-1 to India in the first leg match at the Shiv Chhatrapati Sports Complex.

The Indians struck twice in the first half – Jeje Lalpekhula in the 24th minute and Malswam Fela in the 40th minute – for the win.

Myanmar’s only goal of the game came off Mai Aih Naing in the 33rd minute and which should serve as an inspiration for the return tie at the Youth Training Centre in Yangon on 9 March.