Minute Silence in Respect of Victims of MH370 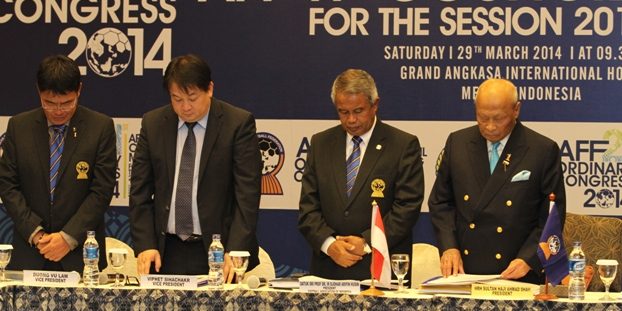 MEDAN (29 March 2014) – The Council members of the AFF observed a minute silence at the start of the 21st Ordinary Congress 2014 here in Medan as a mark of respect to the victims of MH370.

The AFF Council is in Medan for the 21st Ordinary Congress as well as for the 11th Council Meeting for the Session 2011/2015.

His Royal Highness Sultan Haji Ahmad Shah, the president of the AFF, said in his speech that the regional body has received a letter from the Malaysian government acquiescing to the request of a plot of land in the administrative region.

“We have received the letter from the Malaysian government giving us two acres of land in Putrajaya to construct a new headquarters for the AFF,” said Sultan Haji Ahmad Shah at the Congress.

“So we will be commissioning an architect to give us an artist’s impression of the new place very soon.”

At the Council meeting afterwards, the AFF Council received the latest report on the Asean Super League by Committee chairman Zainuddin Nordin, who is also the president of the FA of Singapore (FAS).

To commemorate the 40th Anniversary of the ASEAN Japan Friendship, an Under-14 Football Festival in Osaka will be held on 1-9 April, 2014, with all member countries from ASEAN being invited directly by the Japan FA (JFA).

A seminar for the various Presidents and also the General Secretaries of the ASEAN member countries will also be held around the same time with a courtesy call on the Honourable Prime Minister of Japan on 8 April 2014.

The details of the various tournaments organised under the AFF this year including the qualifying round and also the final round of the AFF Suzuki Cup 2014 were also explained with an AFF Beach Soccer Championship planned for next year.

The next Council meeting will be held at the same time as the official draw for the AFF Suzuki Cup 2014 later in the year.