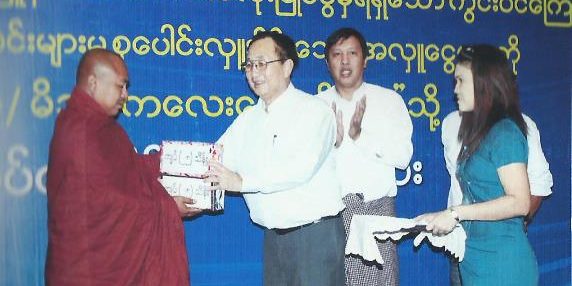 YANGON (4 May 2013) – Humanitarian missions are not just lip service for the Myanmar Football Federation (MFF) where over the last year, they have contributed more than USD 2 million to these worthy cause.

The humanitarian work was widely implemented during the two national disasters that struck the nation in the Ayeyawady region and also the Yangon region. The MFF built and donated a 25-bed hospital costing KYT 470 million (USD600,000) to provide health care services to the people of Watchaung Village, Kyaung Kone Township in Ayeyawady.

And in conjunction with the social support for the fire victims at Mingalar Taungnyunt Township, he also further donated USD 200,000 for the building of a new double storey monastery.  Later the same month, a fund raiser was organised for Disable Sports Federation (DSF) at the Youth Training Centre in Thuwunna.

The match was played between the Myanmar national team and the foreign players in the MNL. After the game, Zaw Zaw donated USD 10,000 towards DSF’s sporting activities.

The MFF and also the MNL clubs donated KYT 10 million (USD86,000) to four education and general welfare schools for the disabled and orphaned children. The money was primarily from the gate collection from the MFF Community Cup 2013 competition.

Through Zaw Zaw’s Ayeyarwady Foundation, they further donated an additional KYT 2.5 million (USD 21,500) to each orphanages.

“While we want to improve the standard of football in the country, it is also important that we take part in social responsibility activities,” said Zaw Zaw. “And we plan to continue doing this every year.”

Other than giving out outright cash, the Ayeyawady Foundation also gave out low-interest loans to the poor to assist them in their farming activities as well as dispensing education assistance to qualified students.