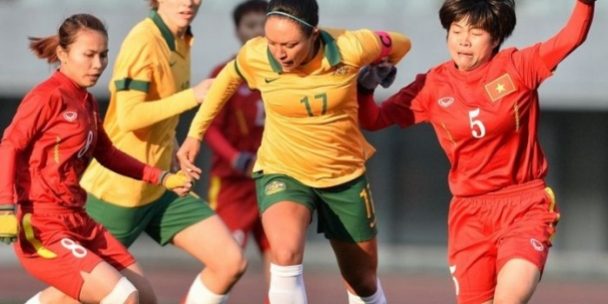 SYDNEY (2 March 2016) – A first half hat-trick from Kyah Simon headlined Australia’s 9-0 win over Vietnam on Wednesday in the AFC Women’s Olympic Football Tournament Rio 2016 qualifiers as the Matildas took another step towards securing a place in Brazil later this year after recording a second consecutive win.

Emily Gielnik put Australia ahead in the 10th minute before Simon’s hat-trick and another from Alana Kennedy sent the Matildas to the break with a 5-0 lead.

Emily van Egmond scored either side of goals from substitutes Ashleigh Sykes and Michelle Heyman before Claire Polkinghorne added another late on to round out the comprehensive victory afterAustralia had kicked-off their campaign with a 3-1 win over hosts Japan on Monday.

“Obviously a good result and a good performance against a team that makes it hard to play against,” said Australia coach Alen Stajcic.

“I’m pleased we scored nine and put together a good performance, but there’s still room for improvement.

“Six points isn’t enough to get us to Rio, there’s still a lot of football to be played. We’re two steps down the track, but we know our next three opponents are very tough and we’re not taking anything for granted just yet.

“We’ve been physically and mentally strong so far, our preparation was very strong, but rest and recovery is the most important factor now that we’re here because we know we’ve done the hard work before we got here.”

Australia handed a debut to 15-year-old defender Ellie Carpenter, who become the eighth youngest Matilda as one of seven changes to the side that defeated Japan on Monday.

But despite the change, Australia looked sharp right from kick-off and went ahead in the 10th minute as Simon surged down the right and played in Gielnik who found herself one-on-one with Vietnam goalkeeper Dang Thi Kieu Trinh before slotting home.

And six minutes later Australia doubled their lead in a move began by Carpenter who found Caitlin Foord in space on the right, and after she was bundled off the ball, it fell to Elise Kellond-Knight who in turn found Simon to slot home.

Kennedy then extended Australia’s lead on 19 minutes when she waltzed through several defenders and slotted past goalkeeper Dang Thi Kieu Trinh before Foord found Simon, whose well-timed run and finish made it 4-0 to the Matildas in the 38th minute.

And two minutes shy of the break, Simon completed her hat-trick after controlling a difficult ball on the edge of the penalty area and seeing her effort from the left loop over goalkeeper Dang Thi Kieu Trinh.

Australia went further ahead in the 64th minute when a half cleared corner fell to Van Egmond whose cross from the left was turned home by half-time substitute Sykes.

Another substitute, Heyman, provided the final cross as Van Egmond made it seven for the Matildas with more than 20 minutes remaining before provider turned finisher as Heyman grabbed Australia’s eighth in the 77th minute.

And five minutes from time Polkinghorne made it a goalscoring clean sweep from the Australia substitutes when her ball from wide out on the right looped past goalkeeper Dang Thi Kieu Trinh.

“Australia were more confident and stronger than us. We did our best, but they were simply stronger in the air than us,” said Vietnam coach Mai Duc Chung.

“Australia fought and pressed and our players did not feel confident.

“We can compare DPR Korea to Australia so we will have to try to try to change our approach and use more lower balls to try to avoid some of the mistakes we made against Australia.”