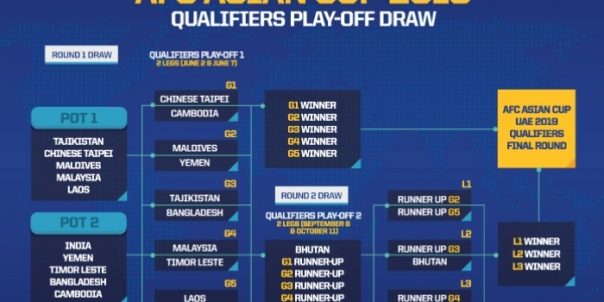 DILI (10 April 2016) – Timor Leste will renew acquaintances with Malaysia while Tajikistan are again set to clash with Bangladesh following the official draw for the AFC Asian Cup UAE 2019 Qualifiers Play-off at AFC House in Kuala Lumpur.

Timor Leste and Malaysia, who finished bottom two positions in Group A of the recently concluded 2018 FIFA World Cup/2019 AFC Asian Cup joint qualifiers, were drawn into one of the five pairings in Qualifiers Play-off 1.

Malaysia drew 1-1 with Timor Leste in their joint-qualifying game in Kuala Lumpur in June last year, before beating their fellow ASEAN side 1-0 in October’s return fixture in Dili.

Tajikistan and Bangladesh were placed in another pairing, having finished fourth and fifth respectively in Group B of the joint qualifiers. The Bangladeshis drew 1-1 with Tajikistan in Dhaka, before losing 5-0 in Dushanbe.

The winner of each pairing (total five teams) will advance to the AFC Asian Cup UAE 2019 Qualifiers Final Round while the remaining five losing teams will join Bhutan in Qualifiers Play-off 2 (total six teams).

In Qualifiers Play-off 2, the six teams will form three pairings and play home and away matches against each other and the winner of each pairing (total three teams) will advance to Qualifiers Final Round.

Bhutan, meanwhile, were drawn against the loser of the Qualifiers Play-off I match between Tajikistan and Bangladesh.