MALAYSIA SHUT OUT ALL DISTRACTIONS TO FOCUS ON GAME 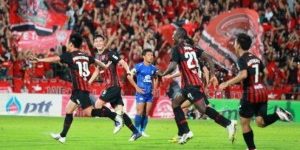 JAKARTA (28 Dec 2010) – Malaysia will try and shut out all distractions including the possible hostile reception from the fans here and focus their efforts on winning the match.

The Malaysians have taken a 3-0 advantage from the first leg final of the AFF Suzuki Cup a few days ago and where they will have to face Indonesia again tomorrow night in the second leg final at the Gelora Bung Karno Stadium.

“I hope it will be a good game with no interruptions,” Malaysian coach K. Rajagobal responded to a question that the Indonesian fans may use laser light emitting devices to disrupt the game.

He said that while he was optimistic of a good result in the final tomorrow, thanks to the three-goal cushion from last week’s first leg, he anticipates a very difficult time in the Gelora Bung Karno.

“Let me tell you, it’s not going to be easy. They have very strong support at home and will have the home advantage,” he said.

In the first leg in Malaysia, the match was disrupted for a few minutes when there was a laser light that was pointed at Indonesian goalkeeper Markus Harison Rihihina.

The police stepped in and after some announcements, it stopped. Some officials in the Indonesian team had blamed the incident for contributing to the team’s loss in the first leg.

Rajagobal said that when Malaysia was beaten 5-1 in the first match against Indonesia, he accepted the defeat.

“We came into this tournament without eight key players and we lost the first game and we accepted it. It will be the same tomorrow; we have come here to win but whatever the outcome, we will accept the result.”

In response to the hostile reception for the Malaysians, Indonesian team manager Andi Tabusalla said he wanted the fans to be gracious hosts.

“We must show that we are good hosts and I really hope there will not be any problems. If we want to win, we must focus on the game.”

On the absence of Oktovianus Maniani, the speedy flanker who has been a key player in the team’s success here, Rajagobal said that Indonesia will still be a strong side.

“With or without Okto, they have good players and are a strong team. I have confidence in my players to give their best.”

Malaysia will face Indonesia in the second leg final in front of an expected capacity crowd of over 80,000 tomorrow at 7pm (local time).