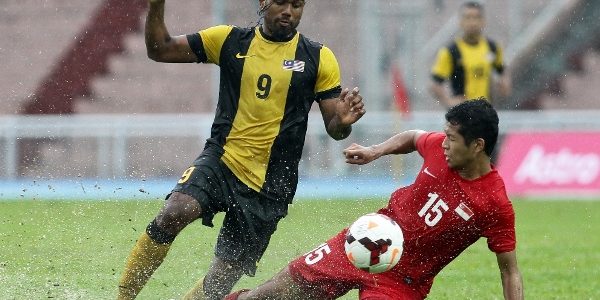 KUANTAN (8 Sept 2013) – Malaysia opened their campaign in the Merdeka Tournament on a positive note with a 1-0 win over their Causeway counterparts Singapore at the Darul Makmur Stadium last night.

Though the scoreline may suggest otherwise, Ong Kim Swee’s boys were way more superior than the Singaporean Under-23 side, but poor pitch conditions and V. Sundramoorthy’s defensive approach prevented Malaysia from adding to the score line.

Thamil Arasu put Malaysia ahead just seconds into the second half after a long ball from kickoff was flicked onto his path by Junior Eldstal. Wan Zack Haikal Wan Noor, who was closely watched throughout the 90minutes, had a golden opportunity to seal the win in the 56th minute from the spot but Syazwan Buhari read the kick well.

In the meantime, MYANMAR and Thailand drew 1-1 in an earlier match. Thailand, who have never won the Merdeka Tournament, went on an early assault and were duly rewarded in the sixth minute through striker Chayawat Srinawong, who deftly placed the ball past goalkeeper Pyaye Phyo Aung.

There was no stopping the marauding Myanmar strikers who went in search for the equaliser and it paid dividends in the 11th minute from a beautiful set piece between midfielder Kyi Lin and his skipper.