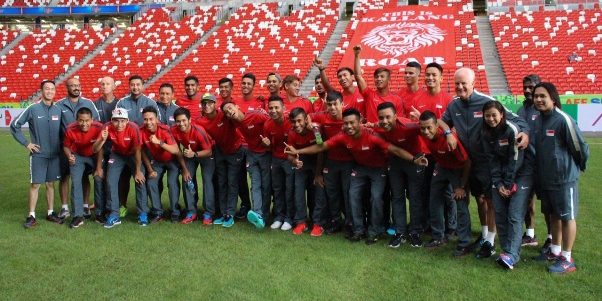 SINGAPORE (21 Nov 2014) – Singapore, the defending AFF Suzuki Cup champions, went walkabout around the National Stadium to get a feel of the brand new state-of-the-art facility which will host the Lions’ opening match against Myanmar in two days. Coach Bernd Stange led the visit today.

According to an official, the trip to the National Stadium today was to give the players a feel of the spanking new stadium. He said the tea had not trained at the stadium at all. While some of the national players already had a feel of the stadium when they faced Juventus, others had yet to step onto the pitch.

Some players were clearly excited and were seen taking photographs. Others appeared more serious, realizing that the task that lay ahead of them. In the last final two years ago, they only had 6,000 fans supporting them, this time around it’s going to be up to 50,000 fans and that’s going to be something else altogether..

Although hosts, Singapore were only allowed to briefly walk on the pitch today. All the teams in Group B here will be given an hour to train on the pitch to help them get a real feel of the playing conditions.