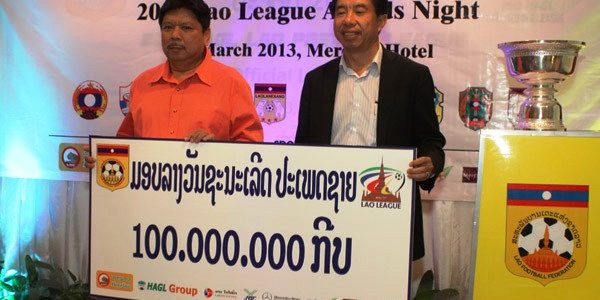 VIENTIANE (21 March 2013) – The Lao Football Federation (LFF) held an awards ceremony this week to recognise the achievements of the Men and Women’s League One 2012.

The ceremony was attended by the Secretary of the Lao People’s Revolutionary Youth Union, Dr Vilayvong Boutdakham, senior officials from the Ministry of Education and Sports, major sponsors and representatives of the football clubs.

In League One 2012, Police FC teams won the championships in both the men and women’s tournaments to dominate the competition. The victorious teams received trophies and cash prizes for their effort.

Awards were also conferred on the best individual players, coaches and referees. During the ceremony, the federation’s past achievements and future plans were also summarised.