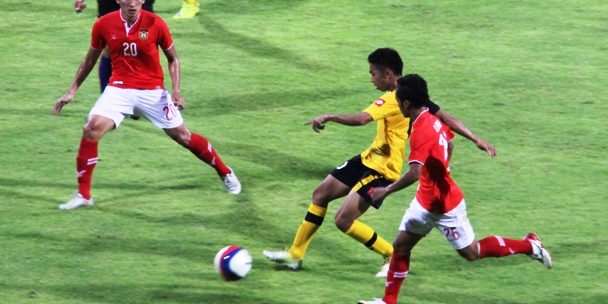 SINGAPORE (31 May 2015) – Laos were made to toil all the way through their encounter at the Bishan Stadium before they were able to edge Brunei 2-1 on the third match day of Group B of the men’s football event here at the SEA Games.

Two years ago in Myanmar, the Laotians had also come out tops when they beat the Sultanate side 3-2.

“I would have liked us to play better,” quipped Laos coach David Booth after the match. “It was not a game for the purists. We gave away possessions too many times and it is disappointing.”

Both teams had gone into the match still reeling from their six goals beating in their first game in the group two days earlier.

Brunei were thrashed by Vietnam while Laos simply had no answer to the overpowering manoeuvres of defending champions Thailand.

But something seems to be missing from the Laos game today. Gone were the usual passing style and hard running down the flanks. Even the usually precocious Soukhaphone Vongchiengkham was missing his usual flair.

Luckily for Laos, they still have Tiny Bounmalay and also Khonesavanh Sihavong to provide the thrust and where after some early pressure finally, broke through when a lay-up from the latter allowed Phouthasey Khochalern to fire in from some 20metres out.

As Laos continued to press well into the second half and wasted several good chances on a trot, it was Brunei who provided the cheer to the stands in the 67th minute when Muhammad Azwan Ali Rahman blasted in the playback from Faiq.

With Brunei growing in confidence, some lackadaisical defending later in the 74th minurte allowed Soukchinda Natphasouk to latch on to the cross from Maitee Maitee for what turned out to be the winner.

“This is one game which I thought that we could at least pick up a point,” said Brunei coach Stephen Ng. “We made some mistakes in defence and we paid for it.”