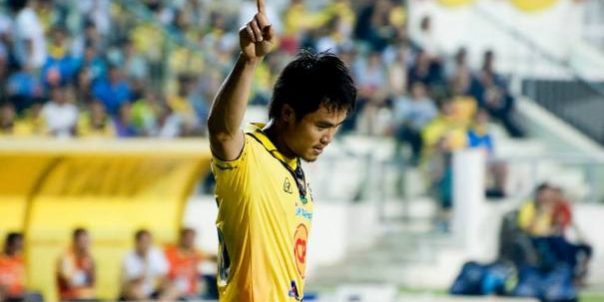 VIENTIANE (9 April 2014) – It was an outing which Yotha FC would rather soon forget when they fell to a 7-0 thrashing at the hands of Lao Toyota FC on the seventh match day of the Lao Premier League 2014.

Kazuo Homma scored four goals in the 16th, 37th, 54th and 85th minute while Sitthideth Khanthavong grabbed a hat-trick when he found the back of the net in the 13th, 75th and 90th minute.

The win was Lao Toyota’s fourth in seven matches as they moved up to third in the standings – behind leaders Ha-Attapeu FC and second-placed Lao Police FC.

In the meantime, Savan FC beat Eastern Star FC 1-0 with the only goal of the game coming in the 52nd minute off Sengphachan Mahakhod.