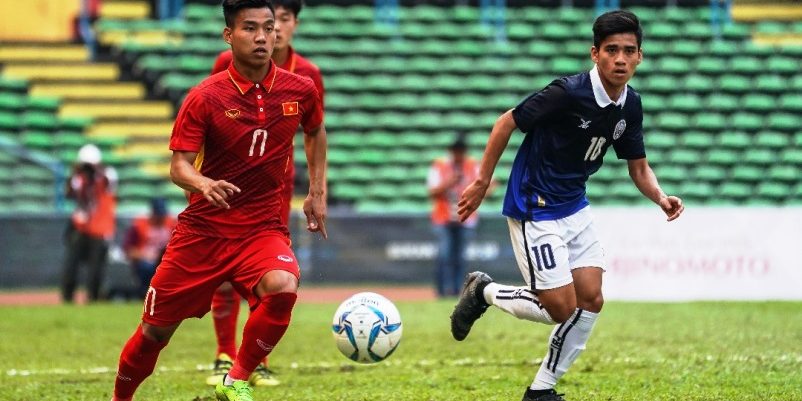 KUALA LUMPUR (17 August 2017) – Vietnam continued with their impressive run in the Sea Games football competition with a 4-1 win over Cambodia in a Group B match played at the Shah Alam Stadium on Thursday afternoon..

It was Vietnam’s second big win in as many matches, having beaten Timor Leste 4-0 on Tuesday and are now the favourites to reach the semi-finals with a top two finish.

The Vietnamese, who have qualified for the AFC Under-23 Finals in China next year, were never in doubt of a win with their strikeforce of Nguyen Van Toan, Nguyen Cong Phuong and Ha Duc Chinh threatening the Cambodian goal right from the kickoff.

However, it was only deep into injury before the break that Vietnam managed to break the deadlock with Cong Phuong finding the net off a cross by Van Toan.

Vietnam were more aggressive in the second half and went on rampage in a six minute spell – adding three more goals, starting with Nguyen Quang Hai, who managed to squeeze the ball into the net off a freekick in the 70th minute.

Two minutes later Cong Phuong sent the Cambodian net dancing with a power packed shot that beat goalkeeper Um Serei Rath all the way. It took the wind out of the Cambodians.

Substitute Ho Tuan Tai completed the rout for Vietnam with the fourth goal which came in the 76th minute before Cambodia got their consolation goal  through a penalty by Nen Sothearoth in the 83rd minute.

Vietnam’s next match is against the Philippines on Sunday at Shah Alam Stadium while Cambodia will face defending champions Thailand at Selayang Stadium.

Vietnam coach Nguyen Huu Thang was more than pleased with his team’s big win and said:

“I am more than happy and satisfied with the performance of my players. They showed hunger although Cambodia were stubborn in the early stages of the match. I hope they will be able to keep the momentum in the coming matches.

His Cambodian counterpart Andrade Vitorino was a dejected man with the big defeat.

“No one wants to lose a match. We came with big hopes but we are drawn in a tough group. However, my young players did well to hold Vietnam in the first half before we conceded an injury time goal.

“We lost focus after Vietnam scored their second goal,” said the Brazilian.