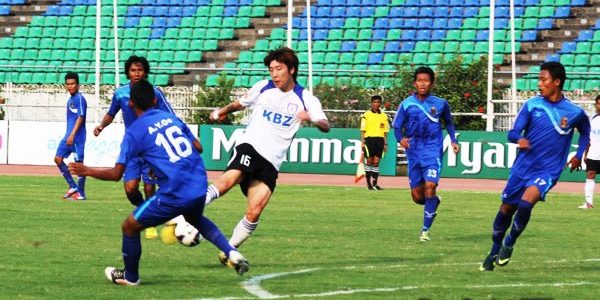 YANGON (12 Feb 2013) – Kanbawza FC dumped Hantharwady United 4-0 on the road to move up to third on the fifth match day of the Myanmar National League (MNL) 2013 that was played at the Youth Training Centre in Thuwunna.

South Korean striker Song put KBZ in front in the tenth minute before Hantharwady shored up their defence for the score to be at 1-0 standstill at the half.

Brazilian midfielder Nunez – who had scored three goals in the last three matches – continued his scoring prowess with the second goal for the visitors in the 64th minute.

With Hantharwady’s defence collapsing soon after that, KBZ took the initiative to heap two further goals through Soe Min Oo’s in the 78th minute and Myanmar’s international defender Thein Than Win’s solo effort right at the end.

The win allowed KBZ to be on third – two points behind leaders and defending champions Yangon United as well as second-placed Zeyar Shwe Myay.

Ayeyarwady defeated Rakhine United with a 2-0 score line for their first win of the new season.