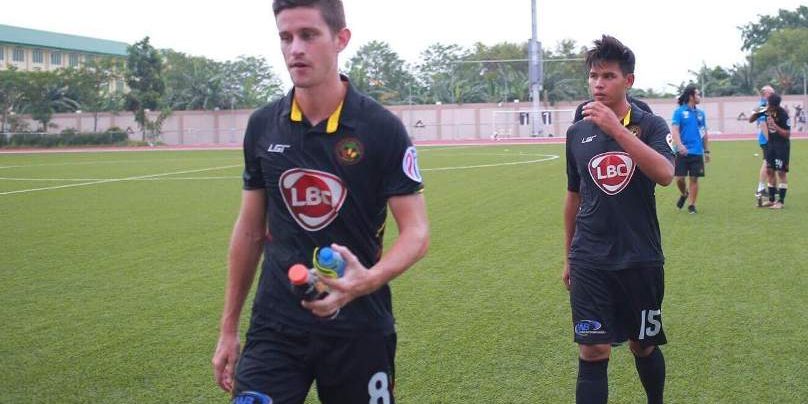 MANILA (2 August 2017) – Kaya Makati missed out on a record sixth straight victory in the Philippines Football League, after Stallion Laguna held them to 1-1 draw at the Biñan Football Stadium. Jordan Mintah’s second half header put the away side ahead, but Dan Villarico’s rebound ensured the points were shared.

“Switching off for a split second, in a game like this, can cost you a goal, especially on the counterattack. And it happened in this game,” rued Kaya head coach Noel Marcaida. “I think my players played well. It’s just that we couldn’t finish despite the many chances that we got. So, that’s one aspect of our game we need to work on. We take the one point, learn from it, and move on.”

Robert Mendy had two great chances to score in the opening period, but his early free header went over, and his curling effort inside the box could only graze the post. Meanwhile, Ref Cuaresma reacted well to deny Gabriele Mascazinni’s near post strike.

Mintah opened the scoring from close range five minutes into the second period, heading in Janrick Soriano’s wonderful delivery from the right flank. But the lead only lasted four minutes. Jhan-Jhan Melliza wriggled free from a counterattack and was given space to fire. Although his shot was well stopped by Cuaresma, the ball fell kindly for Villarico to tap in.

With the teams level, tensions started rising. Things almost boiled over between Jovin Bedic and Ruben Doctora. Bedic had clearly tugged at Doctora, who took exception, and retaliated with a shot to Jovin’s face. Both players were cautioned for the incident.

The introduction of Kenshiro Daniels and Antonio Ugarte provided more control of possession, and allowed Kaya to pepper Stallion’s defense. Mendy headed over again, Mintah had a strike go wide, and Ugarte had a deflected strike stopped. In the end, Makati’s pressure failed to yield a go-ahead.

“When I play against Stallion, I know they’re going to play physical, and they’re going to play all out. We prepared for that,” said Man of the Match, and former Stallion player, Jordan Mintah. “Today, that wasn’t like our side. If you get the chances we got, if we finished them, we would’ve won. We have to go back and work on it. Then, it is time to face Meralco [Manila] again.”

Although the result denied Kaya the distinction of being the first team to reach six straight wins in the PFL, coach Noel Marcaida refused to be too disappointed.

“The month of July we did well. Having seven games unbeaten — drawing two, and winning five — it’s a pretty good record. We were able to meet our objective of getting more points in the month of July. Now we regroup and focus our attention on facing Meralco [Manila] next week.” – http://philippinesfootballleague.com