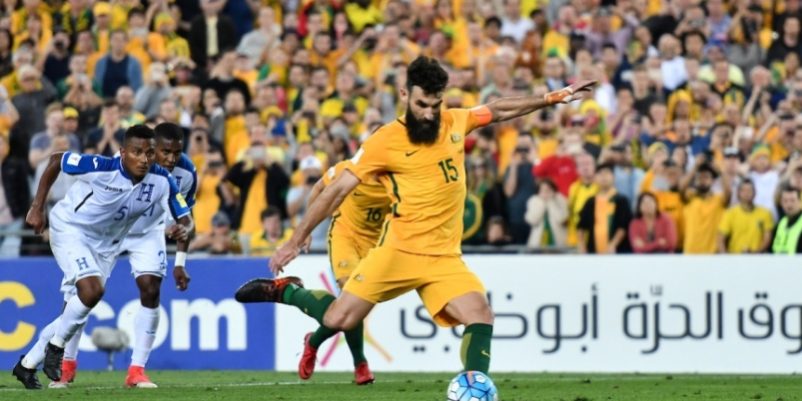 SYDNEY (15 Nov 2017) – A second half hat-trick from captain Mile Jedinak fired Australia to the FIFA World Cup 2018 Russia after an emphatic 3-1 win over Honduras in the second leg of their Intercontinental Play-off at Stadium Australia in Sydney.

The Socceroos victory means that in Russia, Asia will be represented by five nations at the FIFA World Cup for the first time ever.

Jedinak, who came into the playoffs under an injury cloud after a lengthy period on the sidelines with a groin problem, converted two penalties and a free-kick off a wicked deflection to score his first hat-trick for Australia at the most opportune time.

The free-kick came about after a barnstorming run from Tom Rogic just seven minutes into the second half, which drew a foul on the edge of the area, after which Jedinak took the responsibility on his shoulders and fired Australia into the lead courtesy of a deflection from Henry Figueroa that left Donis Escobar stranded.

Twenty minutes later Argentine referee Nestor Pitana picked out a handball against Honduran midfielder Bryan Acosta and awarded a penalty to the hosts, with Jedinak converting past Escobar

Less than 10 minutes later he sent the 77-000 strong crowd at Stadium Australia into a frenzy when he fired home from the spot again to extend the Socceroos lead to 3-0.

As was the case in San Pedro Sula in the first leg, Australia looked to take the ascendency and dominate their Central American opponents early in search of an early goal to ease the nerves of the players and the crowd.

But try as they did in the first half, they struggled to play with any fluency against a Honduras side who were prepared to put numbers behind the ball and looked to frustrate the Australians at every opportunity.

In a scrappy first half in which either side struggled to create goal scoring opportunities, Australia’s best chance of the opening half came after 13 minutes when an Aaron Mooy free-kick eluded everyone in the box before being parried away to safety by Escobar.

Aziz Behich was busy down the left flank as Australia looked to direct most of their attack down his side, and on 37 minutes he managed to get in behind the Honduran defence and cut the ball back for Tom Rogic, but the Celtic midfielder’s tame effort was directed straight at Escobar..

While the first half was tight and tense, the second half was a more open affair as Honduras were forced to chase the game after Australia took the lead.

They created little, but scored a late consolation goal after a scramble in the box.

But this was Australia’s night and as the final whistle blew on the longest qualifying campaign ever undertaken the confetti rained down as Australia celebrated qualification for their fourth straight FIFA World Cup. – www.the-afc.com