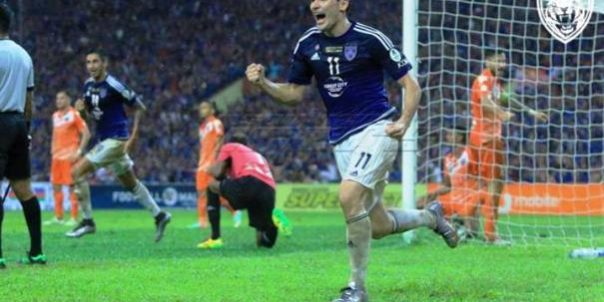 SHAH ALAM (15 May 2016) – Johor Darul Takizm’s experience was the major contributing factor as the Southern Tigers won their first FA Cup – with a narrow 2-1 win over Premier League club side PKNS FC of Selangor in the final at the Shah Alam Stadium on Saturday.

Two penalties were the highlight of the final played on a wet and slippery pitch which with some 75,000 football fans watching the final at the stadium – mostly JDT supporters who came to cheer their team.

And they were not disappointed for making their way to the Shah Alam Stadium. HRH Sultan Ibrahim Sultan Iskandar the Ruler of Johor sprang a pleasant surprise to his Bangsa Johor when he declared Sunday as a public holiday.

For JDT it was their second title this year – having won the Charity Shield at the start of the season.

The Southern Tigers have embarked on a mission this year – to win all the titles at stake in the Malaysian League. The Johor outfit are also the reigning AFC Cup champions and the Malaysian Super League champions.

JDT’s Argentine striker Jorge Pereyra Diaz was named the Man of the Match in the final for his inspiring role in the FA Cup success.

However, it were PKNS who grabbed a fifth minute lead – with Gabriel Guerra making it count from the penalty spot after JDT defender Aidil Zaquan Abdul Radzak was hauled up for bringing down PKNS skipper Gonzalo Soto inside the box.

JDT were on level terms on 16 minutes – also via a penalty. PKNS goalkeeper G. Jeevanathan gave away the spot kick and earned himself a yellow card from bringing down Diaz inside the box when he came off the line to clear the danger. Jeevanathan went sliding on the slippery pitch and in the process sent Diaz sprawling.

Up stepped skipper Shafiq Rahim and he sent Jeevanathan the wrong way. JDT were back in the picture and with their experienced players were able to absorb whatever threat PKNS posed.

The match was settled after 35 minutes. This time a quickly taken freekick by Shafiq had the PKNS backline in sixes and sevens and Diaz’s attempt hit the body of M. Sivakumar and the ball hit the back of the net.

With that went PKNS’ hopes of winning their first ever FA Cup but still it was memorable journey for the Red Ants under coach E. Elavarasan.

“JDT had what it takes to win a Cup final. Their experience was a major contributing factor after we allowed them to equalise through a penalty,” said Elavarasan after the final.

JDT coach Mario Gomez was more than pleased with the win and now looks to continue JDT’s journey to win all titles at stake.

“It was a sweet win,” said the Argentine coach.