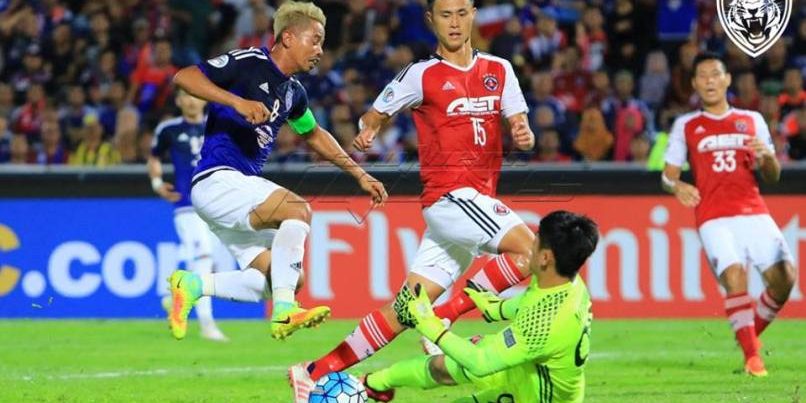 JOHOR BARU (21 Sept 2016) – Defending champions Johor Darul Takzim (JDT) are through to the semi-finals in the AFC Cup competition after 2-1 win over Hong Kong’s South China in the return-leg quarter-final match played at Johor Bahru’s Larkin Stadium on Tuesday.

It was not the best of performance by the star-studded JDT and neither was it an easy win for the champions who even missed a 50th minute penalty by the usually reliable Safiq after a scoreless first half.

JDT, however, were not to be denied the lead they fully deserved and this came in the 58th minute when Juan Martin Lucero found the net – sending a simple tap between the legs of Man Fai from a square pass by Azammuddin Akil.

Goal number two came in the 88th minute and this time Diaz got his name into the scoresheet when he tucked home a dipping header at the far post from a Safiq corner-kick.

Once again South China scored deep into five minutes of added time. Again it was their hardworking Serbian striker Nikola Komazec who found the net and again it was an individual mistake by JDT’s Brazilian centre-back Marcos Antonio when fumbled with a poor headed clearance.

JDT coach Mario Gomez was delighted with the win but said: “We had a tough game. Only after we got our second goal we felt at peace. Our patience paid off.”

His counterpart Ricardo Rambo was disappointed with his team’s exit at the quarter-final stage.

“We played well in the first half and had three good scoring chances to score but we did not make use of it and paid the price,

“But JDT had the players to punish us and this they did,” lamented the Brazilian,

In the semi-finals JDT will play the winner of the Tampines Rovers (Singapore) versus JSW Bengaluru (India). Bengaluru won the first-leg 1-0 at home.

(JDT advance to semi-finals 3-2 on aggregate)