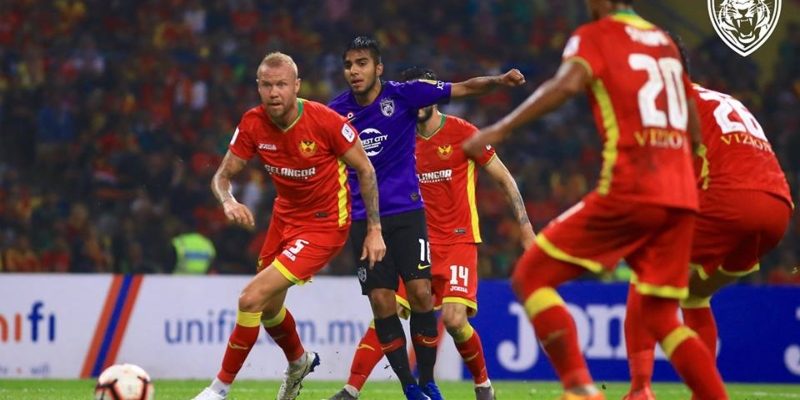 SHAH ALAM (1 March 2019) – Johor Darul Takzim warmed up for their AFC Champions League match with a 4-2 win over Selangor in Friday’s Super League match at the Shah Alam Stadium.
The Southern Tigers rode on a brace by Leandro Velazquez and one each by Gonzalo Cabrera and Diogo Luis Santo. Selangor theirs through Endrick dos Santos and Rufino Segovia.
The defeat left Selangor winless after five matches with only three points while JDT went to the top of the table with 13 points.
JDT went in front after only seven minutes of play with Velazquez firing home past Selangor goalkeeper Khairul Azhan Khalid after Diogo laid the groundwork.
The visitors were 2-0 up after14 minutes – this time it was Diogo who was on target from a rebound from an earlier attempt from Velazquez. The Southern Tigers seemed to be cruising to an easy win but Selangor did not give up.
The Red Giants pulled one back on 33 minutes with a brilliant right-footed volley from outside the penalty box by Endrick dos Santos.
However, Khairul Azhan was beaten for the third time when Cabrera regained JDT’s two-goal cushion when the Argentine made it count off an assist by Diogo.
Spaniard Segovia, winner of the Golden Boot last year, put Selangor back in the picture with a brilliant header deep into injury time in the first half. JDT took the break at 3-2.
Velazquez showed why he is a much-needed player in the JDT setup when he got second on the night – tapping in a rebound after keeper Khairul Azhan failed to make a clean catch off a long-range attempt by Cabrera in the 69th minute.
The score remained 4-2 for JDT till the final whistle.
Meanwhile, at the Sultan Ismail Nasaruddin Shah Stadium in Kuala Terengganu visiting side, Perak drew 1-1 with the Turtle. Perak, the Malaysia Cup champions are still winless after four matches.