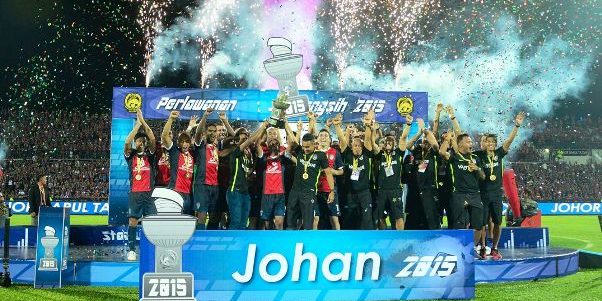 JOHOR BARU (1 Feb 2015) – Super League champions Johor Darul Takzim gave an early signals that the Southern Tigers will be a team to beat in the 2015 M-League season with a roaring start by winning the Charity Shield with a 2-0 win over FA Cup champions Pahang before a sellout crowd at the Larkin Stadium in Johor Bahru on Saturday.

The Charity Shield match also doubled up as a league match which gives JDT three points to their Super League campaign.

A goal in each half paved the way for JDT to finally break the jinx against the bogey team. Brazilain defender Marcos Antoniuo showed the way with the opening goal on 36 minutes before Argentine striker Luciano Figueroa killed off Pahang with the second on the hour mark. Incidentally both goals were scored off corners taken by skipper Safiq Rahim.

On a night when national goalkeeper Farizal Marlias made his debut for JDT after leaving Selangor, JDT could have walked away with a bigger victory margin if not the missed chances by Jorge Pereyra Diaz, Mahali Jasuli and Figueroa.

Diaz and Figueroa were also unlucky to see their attempts coming off the posts twice from long range attempts.

JDT stamped their authority right from the start as Pahang struggled to get their footing right with Matias Conti and Dickson Nwakaeme hardly getting into the picture – signs that the pressure was on the Elephants who did not lose to the Southern Tigers in the two visits to the famed Larkin Stadium – a 2-2 draw in the league and a 2-2 draw in the FA Cup.

Pahang, however, beat JDT 3-2 in the league and 1-0 in the FA Cup at Kuantan’s Darul Makmur Stadium.

However, Pahang cherished their biggest win over their arch football rivals – a 5-3 win on penalties in the Malaysia Cup final after battling to a 2-2 draw in extra time at the National Stadium in Bukit Jalil

JDT will cherish the Charity Shield. Pahang took the field as the defending champions but JDT simply carried too much firepower and the towering Antonio was at the right place at the right time to take advantage of a poor clearance by a defender and send a looping header into the Pahang net past the outstretched hands of goalkeeper Khairul Azhan Khalid – voted M-League’s Best Goalkeeper in the 100PLUS-Astro-FAM national football awards. He was also voted as the Most Valuable Player.

JDT were on fire and came in droves and four minutes later Pahang defender Shahrizan Salleh was booked for a foul on JDT’s national player Mahali Jasuli. Minutes later Mahali got himself booked for an overzealous foul on Pahang dangerman Dickson Nwakaeme.

Any hopes of a Pahang fightback were thwarted by an impressive Farizal who showed a safe pair of hands when Pahang did manage to take pot shots at JDT goal.

When Figueroa fired a bullet like header into the roof of the Pahang net from another corner by Safiq, it was all over for the Elephants as JDT oozed with confidence as the minutes ticked. In the Royal Box at the Grandstand was Johor FA president HRH Brigadier General Tunku Ismail Sultan Ibrahim, the Crown Prince of Johor.

The smiles of satisfaction on his face spoke that JDT are on track to establish themselves as favourites. A perfect start to the season and with that a strong message that visiting teams will be hard-pressed to take points off the Southern Tigers … as their home venue has a simple message ‘This is Larkin.”