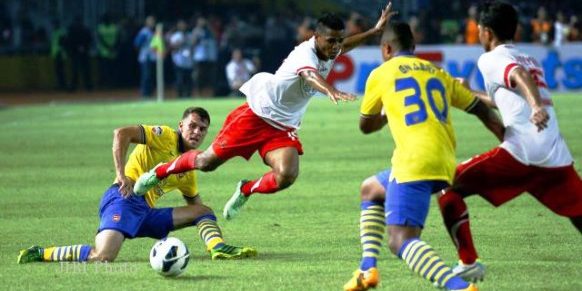 JAKARTA (17 July 2013) – Indonesian chief coach Jacksen F. Tiago has promised to reel in the changes following the 7-0 drubbing the team suffered at the hands of visiting English side Arsenal this week.

With a match against another English side – Liverpool FC on 20 July at the same venue of the Gelora Bung Karno Stadium – coming up, Jacksen confirmed that several players will be dropped from the current squad.

“It is obvious that we have to make these changes, we have to call in new players, with one of them being Greg (Nwokolo),” said Jacksen.

The game against Liverpool is the third big game for Indonesia this year after falling to the Dutch national team 3-0 and then a 7-0 lesson by Arsenal a few days ago.

These matches are being used by Indonesia in preparation for their next match in the AFC Asian Cup qualifiers where they will take on China in October.

“My target is to develop this team, so that the national team will be stronger in the future. We want to learn from every defeat,” he added.

“But having said that, I also feel that we need to start at the right level (when developing the team), play against teams which are of the same level before we take on bigger opponents.

“It has all to do with building confidence and it is for that reason, I have requested to play against the Philippines, Hongkong and Vietnam in August and September.”