It Just Felt so Right – Cahill 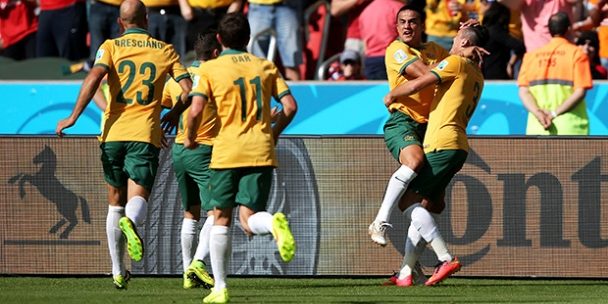 SYDNEY (19 June 2014) – Tim Cahill says he was compelled to take a chance after scoring the most spectacular goal of the World Cup so far and has no regrets about picking up a suspension that will rule him out Australia’s clash with Spain.

The Socceroo forward struck a first-time volley on his weaker left foot to draw his side level at 1-1 with the Netherlands in Porto Alegre on Wednesday, although he was unable to prevent Ange Postecoglou’s team from going down 3-2 at Estadio Beira-Rio.

Having joined the exclusive company of players to score at three World Cup finals with his header against Chile last week, the 34-year-old has now offered up a goal likely to go down in Australian football history as one of the best.

“It’s a great moment,” he said. “Gowser (Ryan McGowan) crossed it from the right and the ball was sitting beautifully. Either I chest it or head it back. But if you want a shot at the title you’ve got to have a go at those. It just felt so right to hit it and I hit it sweetly.

“That’s what it’s all about. Defining moments – another one in my career that I’m really proud of.

“Everyone dreams of playing on this stage. I want to leave a mark for all the kids back in Australia and around the world to be inspired by this today.”

The New York Red Bulls man also collected his second yellow card of the tournament for a challenge on Bruno Martins Indi, an incident saw the Feyenoord defender stretched with a suspected concussion after slamming his head on the turf.

But Cahill claimed to have no regrets over missing the Socceroos’ final Group B clash with Vicente del Bosque’s 2010 winners.

“It is what it is,” he said. “I leave everything on the pitch. If we’d got something out of the game today then I would have been fine.

“But I’ve left everything on the pitch the last two games I’ve played and that’s what you’ve got to do. You’ve got to put your body on the line and sometimes you miss games.

“This has been an amazing World Cup campaign for us but it’s not over yet. We’ll really try to test ourselves against one of the best in the world.”

Having trailed to Arjen Robben’s opener, Australia led the Netherlands 2-1 in the second half courtesy of a Mile Jedinak penalty.

According to Cahill, the Socceroos felt they were in with a chance of winning the game even before kick-off.

“It was an amazing performance,” he said. “I think overall we knew this was our chance. We watched a lot of videos on them and we thought we could win this game.

“From the start we set out to press them high. And really let them know that they were up for a game and to play football.

“It’s probably one of the unique moments for us in Australian football because we’ll earn a lot of respect from today’s game.

“We’ve had a lot of criticism here and there. But overall it’s all about the way we play football and what we believe in.

“We’ll just take in on the chin and we’ll move forward. We’re just here to play football and enjoy it.”