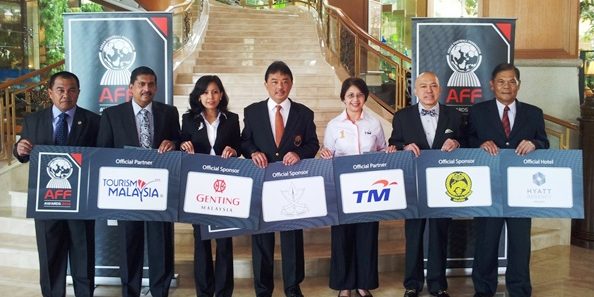 PETALING JAYA (27 March 2013) – Eighteen awards will be presented to distinguished individuals who have helped sculpt the development of football in ASEAN, according to a statement by AFF. The statement was released during a ceremony to celebrate the sponsors of AFF Awards 2013.

“It is indeed gratifying to note that we have such incredible support from our sponsors who have come in with such generosity and commitment. We are very appreciative of this and thanks to these partners, we are confident that AFF Awards 2013 will be a great success,” said Tengku Abdullah.

During the ceremony, AFF also announced that His Excellency Tengku Tan Sri Dato’ Seri Ahmad Rithauddeen, who was Federation President from 1996 to 2011, will receive the AFF Life Service Award at the AFF Awards 2013 to be held on April 3.

He is credited to have led AFF’s revival in 1996, playing a major role in the Federation’s success over the years, including hosting the AFF Suzuki Cup. He is also AFF’s Honorary Life President and has demonstrated a strong and sincere dedication to the betterment of ASEAN football during his presidency and beyond.

The Federation is also conferring the ASEAN Goodwill Award to HRH Sultan Haji Ahmad Shah, who is being recognised for outstanding acts and gestures of goodwill and fair play during the year.

AFF noted that when His Excellency Tengku Ahmad Rithauddeen stepped down from the presidency in 2010 and was succeeded by His Royal Highness Sultan Haji Ahmad Shah, the ASEAN Football Federation grew from strength to strength. Its foundation became stronger, with the new president aiming to not only lift the sport to a higher level; but to also provide assistance and much-needed aid through humanitarian efforts and philanthropy.

In 2012, the Mindanao islands in the Philippines were devastated by typhoon Bopha.  Entire communities vanished overnight, washed away in mudslides and flash floods.  His Royal Highness Sultan Haji Ahmad Shah rallied the Council of the ASEAN Football Federation to raise funds amounting to USD100, 000 to help communities rebuild their lives.

The Federation will also applaud the achievements of outstanding individuals and teams who have made exemplary contributions to football.

AFF highlighted that the winners have been chosen by a selection committee who monitored each award recipient’s play and progress during each game in the AFF Suzuki Cup 2012 and other competitions organized by AFF, AFC and FIFA.

The AFF Awards Night 2013 will see 16 other awards including AFF Player of the Year, AFF Referee of the Year, and AFF National Team of the Year conferred to ASEAN’s most illustrious individuals and teams in the football world.