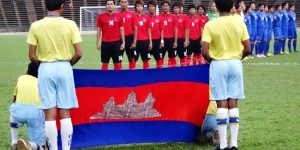 The 27-year-old recently signed for Pelita Jaya FC who are currently at the bottom of the Indonesia Super League.

More than anything else, Safee said that he has a job to do in Indonesia and that is to score goals and that will be his main priority.

“My main aim is to help Pelita Jaya FC to better their position in the league even though they have a lot of young players in the squad,” said Safee.

“I’m ready for anything and that includes the attention of the Indonesia media. I know that the media can be aggressive at times and while I and my family might be the focus, I hope that I can at least ensure there’s no over exposure.”

Safee said that he is up to the task of being under the spotlight considering that he is a foreigner with Pelita Jaya and also he was instrumental in beating Indonesia in the final of the AFF Suzuki Cup 2010.

Malaysia edged out Indonesia for their first regional title following their 4-2 win in the two-legged final last December.

“My mind is just focussed on scoring the first goal for Pelita Jaya. My target is to score at least one goal a game although I’m also facing the possibility that I might face some tough times ahead in finding the back of the net. Whatever it is, I’m ready for Indonesian football,” he quipped.

Pho Hien FC to allow fans back for National Cup opener
May 22, 2020