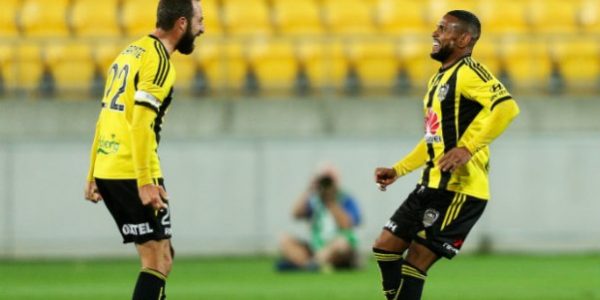 SYDNEY (20 April 2015) – The penultimate round of the Hyundai A-League season had a little bit of everything. Epic comebacks, red cards, 20 goals and a milestone man delivering the goods.

What a thriller at the ‘Cake Tin’. Phoenix produced an astonishing fightback to overturn a two-goal half-time deficit to win 3-2 thanks to Kenny Cunningham’s strike in the fifth minute of stoppage time.

Talk about leaving it late. Roly Bonevacia got the comeback started before Cunningham proved to be the super-sub, coming off the bench and scoring a brace late-on. The result keeps Phoenix right on the tail of Sydney FC in the race for a top-two berth, with the two meeting in a final-round blockbuster next weekend.

The Sky Blues’ defensive frailties popped up again which won’t be pleasing coach Graham Arnold. But going forward they are looking great heading into the finals.

After a half-time rev-up from Arnie, Sydney FC was devastating in attack with skipper Alex Brosque scoring two [his second brace in as many weeks] and another from Bernie Ibini putting them 3-1 up only to let the home side back into it.

Substitute Robert Stambolziev spared the Sky Blues blushes with his first goal for the club. The victory maintains Sydney’s fabulous unbeaten record on the road this season.

The Wanderers moved off the bottom of the Hyundai A-League ladder thanks to a spirited 2-1 win over Adelaide United. Pirtek Stadium was rocking in the second half as a Tomi Juric penalty and clinical Mark Bridge strike saw the Wanderers over-turn a 1-0 half-time deficit.

It was the perfect way for Bridge to cap his 200th game in the competition. Just the ninth player to achieve that milestone, too. It’s the perfect lead-in to a massive AFC Champions League game against Kashima Antlers on Tuesday night which will go a long way to determining their fate in the Continental competition.