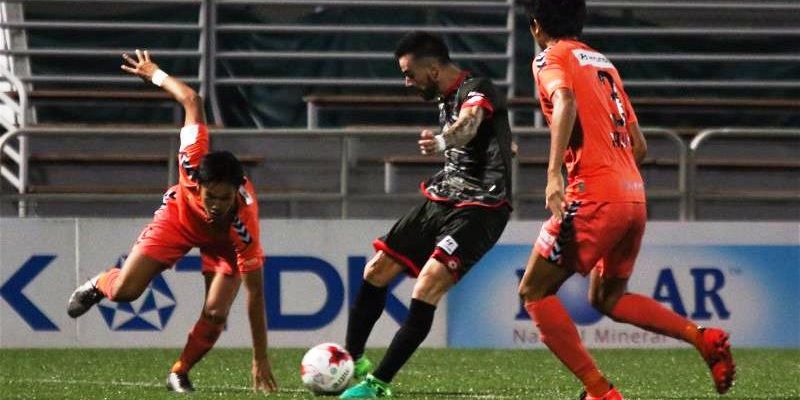 SINGAPORE (17 June 2017) – Albirex Niigata (S) stretched their lead at the summit of the 2017 Great Eastern-Hyundai S.League to eight points after a comfortable 4-0 win over Brunei DPMM at the Jurong East Stadium on Friday night.

Tsubasa Sano and Ryota Nakai handed Albirex with a two-goal lead at half-time before Rui Kumada and Naofumi Tanaka added their names on the scoresheet in the second-half to ensure Albirex record their tenth victory of the season.

Kento Nagasaki curled one wide at the other end four minutes later but there was no denying Albirex from taking the lead in the ninth minute.

Springing the offside trap, Sano then calmly slotted the ball past an onrushing Awangku Mu’izzuddin to take his tally to 16 for the season.

However, DPMM did have their chances to level matters with two chances in the space of two minutes.

Alvarez’s shot on the turn drew a good save from Albirex custodian Nozawa in the 26th minute before Adi Said fired straight at Nozawa after latching onto a pass from Vincent Reyes two minutes later.

Steve Kean’s side were made to rue those misses as Sano turned provider, crossing low for Nakai to poke home from close range in the 34th minute.

DPMM could have reduced the deficit minutes before the break when Adi stole the ball off Yasutaka Yanagi but drilled a low shot that trickled wide instead.

The White Swans continued from where they left off and further extended their lead five minutes after the restart.

Arriving late at the far post, the unmarked Kumada powered home a header that flew into Mu’izzuddin’s bottom left corner for 3-0.

DPMM tried to muster a response but Adi’s header off Najib Tarif’s deep cross in the 54th minute was unable to trouble a largely untested Nozawa.

Alvarez then wriggled his way through before hitting a low shot that was blocked for a corner in the 70th minute. From the ensuing set-piece, Adi glanced a header just over at the near post.

Substitute Shoichiro Sakamoto almost added a fourth for Albirex seven minutes from time but saw his effort excellently tipped over by Mu’izzuddin.

But left-back Tanaka would seal victory for the home side with four minutes remaining, lashing a powerful shot past Mu’izzuddin after DPMM failed to clear their lines from a corner.

There were no further goals thereafter as Albirex extended their unbeaten run to 11 games and sit pretty on top of the standings, albeit having played a game more than nearest challengers Home United.