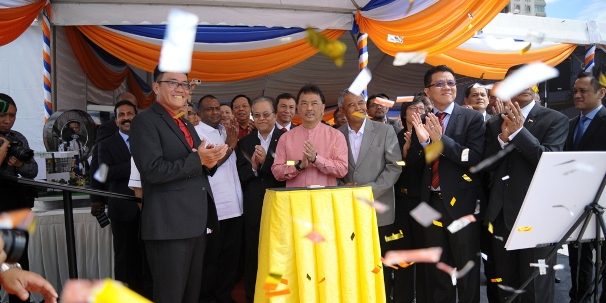 PUTRAJAYA (5 February 2015) – His Royal Highness Tengku Abdullah Sultan Haji Ahmad Shah, on behalf of the President of the ASEAN Football Federation Sultan Haji Ahmad Shah set another milestone in the history of the regional body when he laid the foundation for the new AFF headquarters that will be built here in the Malaysian administrative capital of Putrajaya.

At the event that was also attended by Presidents and General Secretaries of the various ASEAN member countries, Tengku Abdullah initiated the ground breaking ceremony for the AFF headquarters at Precint 5, fronting the Malaysian Ministry of Higher Education.

“The Ground Breaking Ceremony of the new ASEAN Football Federation headquarters is indeed a ground-breaking achievement. The AFF has a permanent place to call a home of its own,” said AFF vice president Brigadier General Khiev Sameth in his speech.

“The AFF and Asean Football will eternally be grateful to the Malaysian Government, particularly the Honourable Prime Minister, Yang Amat Berhormat Dato’ Sri Mohd Najib Tun Razak, for giving us this two-acre plot of land here in Precinct 5 of Putrajaya.

“His Royal Highness Sultan Haji Ahmad Shah, in His inaugural speech at the start of His term as the AFF President in 2011, specially mentioned that among his biggest agenda for AFF was to have a building to call its own. Today, His Royal Highness has delivered His promise.  Once again Your Royal Highness, on behalf of the Asean Football Family, I would like to place on record our deepest appreciation and heartfelt gratitude for your contribution.”

The new AFF headquarters in Putrajaya will be built through a joint partnership with Nadi Cergas Development Sdn. Bhd.

The new purpose-built five story building will have a gross floor area of approximately 26,000 square feet. As the permanent home of AFF, the headquarters will also have lecture and seminar rooms alongside the office suites.

The new building which is fronting the Malaysian Ministry of Higher Education, is situated near the Putrajaya International Convention Centre (PICC) and also the five-star establishment of the Pullman Lakeside hotel.

It is also situated next to the planned Putrajaya Stadium.

The current AFF office is at a landed property in Petaling Jaya.

“With this piece of land that will house the AFF HQ, we will be able to build a better future for football in the region,” added Khiev.

“Let us work towards bequeathing ASEAN football a better future, a stronger region, and finally an ASEAN Nation that is able to compete in the FIFA World Cup, whoever that may be or possibly host the World Cup in the near future.”

The expected completion of the project would be in 2017.